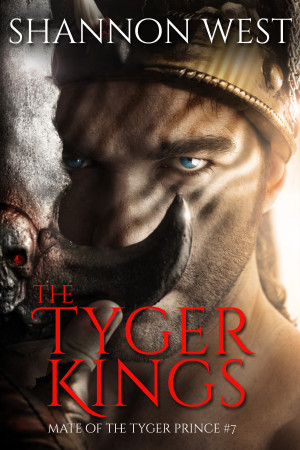 Blake is frightened and hurt by his actions, but terribly angry. He follows the king back to Tygeria, if only because Davos had the gall to take their two younger children with him when he left. His ship is slower than the king’s, though, and when he arrives back on Tygeria, he finds the king has left again, on a wild chase after his errant son and his pirate mate. Even worse, he makes a unilateral decision to send their son Larz to a faraway planet for military training, against Blake’s express wishes.

When Davos, Derrick and Larz all go suddenly missing, Blake attempts a rescue mission, but encounters a strange wormhole in space, and is flung through it to crash on an unknown planet called Tveir. Strangest of all the planet is populated by Tygerians and their handsome king. Injured and disoriented, Blake begins to feel as if he’s trapped in some crazy story. Except this isn’t any kind of story at all—this is Blake’s life, and the plot has just taken an unexpected, heartbreaking and totally infuriating twist.

You have subscribed to alerts for Shannon West.

You have been added to Shannon West's favorite list.

You can also sign-up to receive email notifications whenever Shannon West releases a new book.