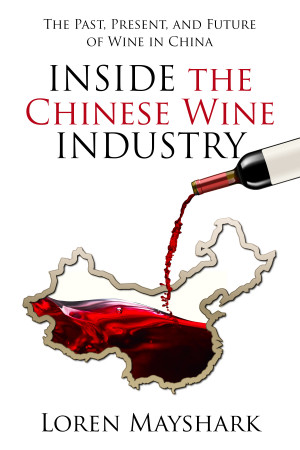 Inside the Chines Wine Industry: The Past, Present and Future of Wine In China

By Loren Mayshark
From the award-winning author of Death: An Exploration comes a groundbreaking book on the Chinese wine industry.The perfect book to read with a glass of wine in hand.Inside The Chinese Wine Industry takes you on a thrilling adventure through the past, present and future of wine in China.

The wine business is one of the world’s most compelling industries and China is considered the rising star. More
The perfect book to read with a glass of wine in hand.Inside The Chinese Wine Industry takes you on a thrilling adventure through the past, present and future of wine in China.

The wine business is one of the world’s most compelling industries and China is considered the rising star. A hidden secret, the Chinese wine production continues to grow at an amazing pace. It is poised to soon enter the top five producing nations, supplanting long established countries such as Australia.

Wine has had a meteoric rise in China over the past two decades. The nation is projected to become the second most valuable market for wine in the world by 2020. One recent study concluded that 96% of young Chinese adults consider wine their alcoholic drink of choice. Not only does Inside the Chinese Wine Industry explore current expansion and business models, it also journeys back to the past to see where it all began.

Highlights of what You Will Learn

How a tourist can enjoy unique wine experiences in China

Why is mass wine production and consumption a modern phenomenon

What the future hold for the Chinese wine industry

How good Chinese wine is and how good can it be

What changed to make China wine-crazy?

Loren Mayshark was fortunate to have parents who offered him opportunities to see the world and introduce him to many exciting places which instilled in him a passion for travel. As his wanderlust grew, he journeyed to more than thirty US states and at least as many foreign countries while visiting four continents.

After college, he supported his itinerant lifestyle by working dozens of jobs including: golf caddy, travel writer, construction worker, fireworks salesman, substitute teacher, and vineyard laborer. Predominantly his jobs have been in the restaurant industry. He cut his teeth as a server, Maître D, and bartender at San Francisco's historic Fisherman's Grotto #9, the original restaurant on the Fisherman's Wharf. While working with a colorful crew of primarily Mexican and Chinese co-workers, he gained a passion for Spanish and spent several months wandering through South America.

While living in New York City he attended both the famed Gotham Writers' Workshop and the prestigious New York Writers Workshop where he was inspired to assiduously learn the craft of writing. He is a regular contributor to Can the Man(cantheman.com), an alternative media resource focused on social justice, and the Jovial Journey (thejovialjourney.com), a website dedicated to food, drink, and travel. He has written for The Permaculture Research Institute and Uisio among other prominent outlets.

He received a B.A. in World History from Manhattanville College in 2004 while minoring in World Religions. He attended the M.A. History program at Hunter College in Manhattan.

You have subscribed to alerts for Loren Mayshark.

You have been added to Loren Mayshark's favorite list.

You can also sign-up to receive email notifications whenever Loren Mayshark releases a new book.