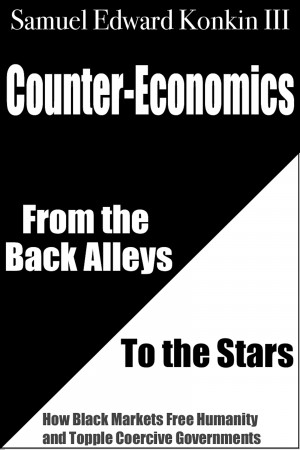 Counter-Economics: From the Back Alleys to the Stars

From the Introduction: "Are you reading a self-help book, a personal liberation manual, a financial advisory, an esoteric economics text, an anti-political platform, a muckraking history, a sensational exposé of underground life, or an anarchist cookbook? The answer is all of the above.

"That may sound confusing, but the main purpose of this writing is to extract unity from these topics usually unconnected in most minds today. I hope it will indeed amuse and excite the reader about another, accessible way of life, give new explanation to some of the vexing problems that beset our social life, and perhaps solve a few."

Samuel Edward Konkin III (1947-2004) was the author of the seminal works on libertarianism and agorism, New Libertarian Manifesto and An Agorist Primer. Over the course of thirty years, he wrote, edited, and published newsletters and magazines such as Laissez Faire, New Libertarian Notes, and 101 issues of the longest-running publication of its kind, New Libertarian Weekly.

Counter-Economics was intended to be his magnum opus, the distillation of all his work and research over 15 years of movement activism. Sadly, of the 18 chapters outlined, only ten were written. Of those, only six had been found at the time of publication.

“Konkin’s writings are to be welcomed. Because we need a lot more polycentrism in the movement. Because he shakes up Partyarchs who tend to fall into unthinking complacency. And especially because he cares deeply about liberty and can read and write, qualities which seem to be going out of style in the libertarian movement.” -- Murray N. Rothbard, PhD

Samuel Edward Konkin III (1947-2004) was a vanguard movement theorist and hard-core activist since the historic split between libertarians and conservatives at the 1969 YAF convention in St. Louis. In the subsequent three and a half decades, he served as editor and publisher of the longest-lived libertarian publication, beginning as Laissez-Faire! (1970), then as New Libertarian Notes (1971-75), New Libertarian Weekly (1975-77, the longest-running libertarian weekly), and New Libertarian (1978-1990).

He coined the following terms and concepts, many of which have turned up in Newsweek, the works of Hedrick Smith, and all libertarian publications: Counter-Economics, agorism, minarchy, partyarchy, anti-principles, Left Libertarianism, anarchozionism, “Browne-out,” red market, Kochtopus, and more. He has influenced the works of authors such as J. Neil Schulman (Alongside Night) and Victor Koman (Kings of the High Frontier), who both had their first professional fiction sales in the pages of his publications.

Mr. Konkin was guest of honor at science-fiction conventions and libertarian gatherings and was a seasoned world traveler. His last completed book, An Agorist Primer, was published in hardcover in 2008 by KoPubCo. Counter-Economics, his unfinished magnum opus, is now available in e-book form, also from KoPubCo.

You have subscribed to alerts for Samuel Edward Konkin III.

Would you like to favorite Samuel Edward Konkin III?

You have been added to Samuel Edward Konkin III's favorite list.