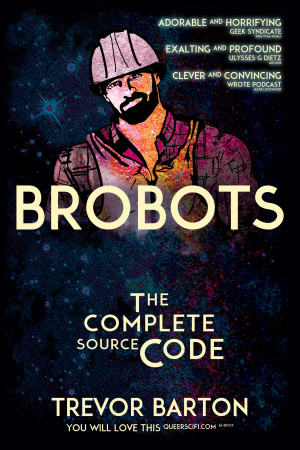 BROBOTS. They're easy to treat like trash. But not so easy to ignore; especially the ones experiencing the wake-up.

This critically acclaimed cult debut of substantial science fiction with gay characters enjoyed by a wide audience is, for the first time, in one complete and revised special trilogy omnibus volume. More
Rod burners. Scaff dawgs. Laggers. Bucket dumpers. Lerps. Duct monkeys. Tin knockers. Lumbergs. Artificial big guys. Product of a troubled firm. BROBOTS. They're easy to treat like trash. But not so easy to ignore; especially the ones experiencing the wake-up.

The idea was that they could work hidden in society's plain sight allowing humanity time to get used to the fact of sentient machines.

But it's all too easy for others to take advantage of those who live on the edge. What they, and their allies, must do is work out who, and why, before it gets too late.

Brobots - a critically acclaimed cult debut of substantial science fiction with gay characters enjoyed by a wide audience - is, for the first time, in one complete and revised special trilogy omnibus volume.

"You will love this" - QueerSciFi.com (BA Brock)

"Original. I recommend this to anyone. One of the finest Science Fiction trilogies I've ever read... Be in awe of the brilliance." - Book Review Village (William C. Bitner, Jr)

"The whole series is beyond phenomenal" - OJHeSay.com (Orlando Castellano)

Price: $5.99
$2.40 USD
Buy with coupon Use the code AGB60 at checkout for 60% off during our site-wide promotion!
(Offer good through May 31, 2020 )
Have a better coupon?
Add to cart, then apply your coupon
Add to Library Give as a Gift
How gifting works
Create Widget
Tags: gay science fiction epic robots cyber lgbtq
About Trevor Barton

Trevor Barton was born on the south coast of England to a biker and a supermarket attendant. The conservative small home town of his childhood was a place which, by the late 80’s, felt to him more like a miniature US State than a British place for stiffened upper lips: the town’s locals adored line dancing; his church shot its theology from the hip; fast food appeared. Punk was out and baseball-capped rave was in.

Shifting senses of nationhood, extreme theology and some family tragedy (his father became disabled, his mother died when he was sixteen) weren’t his only sources of childhood alienation and estrangement: for a few years as a teen he was sent to a military training corps for toughening up. As an attempt (almost certainly) to turn him straight this didn’t work.

He studied at Bath Spa (a place known for its emphasis on skills development during the study of arts subjects). His main submission was a well-received script for a play. His multi-disciplinary MA dissertation (in 1998) explored why our culture takes interest in cyborgs using (among other things) feminist criticism and the latest in AI philosophy. His interests in technology and creative industry led him to become a managing editor writing a mainstream UK web tech magazine after only his second career move. From there he stepped sideways into web development (something still new at the time) and sent sites live for global names like Nature. This got him bar-crawling Nashville and sharing sidewalks with alligators in Florida while on business trips.

He started writing novels in October 2016 and produced his first three in just twelve months.

Estrangement aside, later lived experience with mental health might explain some of the more significant preoccupations in his writing. Grand themes of human becoming are interrupted with welcome moments of bathos; philosophy or sociology is sometimes disrupted with calamity and mischief; and hard science mixes with the unknowable and profound.

He lives with his husband in Europe. An Internet Speculative Fiction Database (ISFDB) entry exists.

You have subscribed to alerts for Trevor Barton.

You have been added to Trevor Barton's favorite list.

You can also sign-up to receive email notifications whenever Trevor Barton releases a new book.