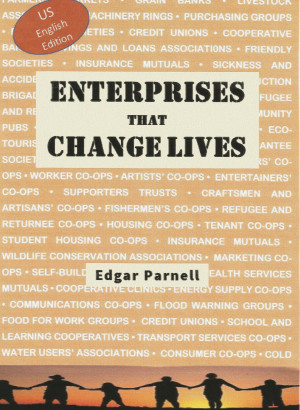 By Edgar Parnell
Rated 5.00/5 based on 1 review
This book explains how ‘self-help enterprises’ (including cooperatives, credit unions, mutual insurers, building societies, friendly societies, community enterprises, and many other types too) work in support of people wishing to improve their lives. It describes the characteristics of these enterprises and how to run them so that they achieve their purposes. More
Millions of people worldwide are members of mutually-owned enterprises that can positively change their lives. Together, they control their self-help enterprises (SHEs), such as cooperatives, credit unions, mutual insurers, building societies, friendly societies, community enterprises, and many other types too. This distinctive form of enterprise help members to get a better deal by intervening in the market in their best interest, while providing an organization that exists to serve them, helping them, their families and communities to build a better future. SHEs work for people with widely differing needs; for example, marketing produce, supplying farming inputs, getting healthy food at fair prices, accessing financial services such as credit and savings, insurance and mortgages, providing decent housing, health, and care services, maintaining shops, pubs, and transport in their local area, or by managing their workplaces.
This book explains how, in the 21st century, to run SHEs that achieve their purpose and meet the real needs of their members. It specifies the model of enterprise required, set-out the systems and the culture needed to ensure that they are fully effective. The book doesn’t advocate doctrinaire approaches; it provides essential concepts and tools that transform how to organize and manage SHEs. The intention is to help leaders think-through the issues involved so that they can make better decisions, for, without the proper organization and systems, it’s highly unlikely that even the most enthusiastic leader will make a success of their enterprise. The model of enterprise furnished takes account of centuries of international know-how and encapsulates the ‘foundation practices’ that sustain this form of enterprise and is designed to ensure self-help enterprises focus on achieving their real purpose and work in the best interest of their members. The book also explains why individuals, communities, and nations need SHEs if they are to prosper, and what policy-makers, community-developers, and academics can do to help grow and sustain them.
Available ebook formats: epub mobi pdf lrf pdb txt html
First 20% Sample: epub mobi (Kindle) lrf more Online Reader
pdb
Price: $3.99 USD
Buy Add to Library Give as a Gift
How gifting works
Create Widget
Tags: cooperatives associations social clubs credit unions coops building societies food coops mutuals savings and loan associations selfhelp enterprises
About Edgar Parnell

Edgar Parnell has managed, studied, researched and advised a wide variety of self-help and mutual forms of enterprise (SHEs), in more than 40 countries. He started work at a retail co-op in the North of England, in his early twenties, he worked mainly on turning-around declining retail co-ops in the UK. During the late 1960s and the 1970s, he primarily worked on setting-up and developing SHEs in post-colonial countries. Following the collapse of many communist regimes, he worked in several countries introducing market-based SHEs. He also worked in several countries where SHEs replaced government-sponsored marketing boards. In 1980 he joined the Oxford-based Plunkett Foundation and was its chief executive from 1984 to 1998; after which he became an independent consultant, working internationally. During his career, he has worked on projects for significant SHEs, governments, European and United Nations agencies, and been a representative on national, European and international bodies dealing with SHEs. During the past five years, he has systematically reviewed his lifetime of work, undertaken additional research and written his latest book – Enterprises that Change Lives.

Reviews of Enterprises that Change Lives by Edgar Parnell

This is a confident, coherent account of the ways in which people taking action together can be accelerated and sustained through the formation and running of a self-help enterprise. Edgar remains on top form!

You have subscribed to alerts for Edgar Parnell.

You have been added to Edgar Parnell's favorite list.

You can also sign-up to receive email notifications whenever Edgar Parnell releases a new book.