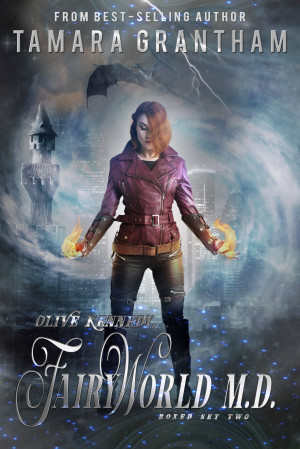 From award-winning author Tamara Grantham comes a boxed set of the second three full-length Fairy World M.D. books. This set includes exclusive bonus content, and offers the reader a discount over purchasing each novel individually. The Fairy World M.D. Series is a multi-award-winning, best-selling urban fantasy fairytale series with over three hundred five-star reviews on Amazon. This series is richly written, populated with engaging characters and plotlines, and is perfect for fans of Magic Bites, The Kate Daniels Series by Ilona Andrews.

Olive isn't ready to go back to work. But when her dragon stepfather shows up on her doorstep with bad news of the world-ending variety, that's exactly what she'll have to do. He wants her to stop the elven queen from obtaining seven weapons of King Arthur fame, and he wants her to break into a dragon's vault to do it. One problem. Silvestra, the silverwitch of Dragon Spine Mountain, guards the weapons. And she's not willing to give them up.

Heidel is a Wult warrior princess, and she’s having a bad day. First, a pack of wraiths chased her from a dragon's vault. Then, her traveling companion lost the staff they stole, and instead of reclaiming it, he created a portal that sucked them into a nightmarish world full of noxious fumes and mechanical beasts: Earth. To make matters worse, Heidel is now stuck with the incompetent thief in Paris, and they have no way to get back home…

Olive’s been stuck on Earth for the past four months, waiting for the spring equinox to arrive so she can return to Fairy World. She's eager to see her handsome Viking fiancé who's waiting for her. She hopes her mission to reclaim the sword of Dracon—a sword of King Arthur fame and the only weapon capable of killing Theht—won't result in death and destruction. And there's the small matter of an asteroid that's been ripped out of its orbit and is hurtling toward Earth…

Tamara Grantham is the award-winning author of more than a dozen books and novellas, including the Olive Kennedy: Fairy World MD series and the Shine novellas. Dreamthief, the first book of her Fairy World MD series, won first place for fantasy in Indiefab's Book of the Year Awards, a Rone award for best New Adult Romance of 2016, and is a #1 bestseller on Amazon with over 200 five-star reviews. She has recently signed with Clean Teen Publishing for a fairytale retelling trilogy.

Tamara holds a bachelor's degree in English. She has been a featured speaker at numerous writing conferences and a panelist at Comic Con Wizard World speaking on the topic of female leads. For her first published project, she collaborated with New York-Times bestselling author, William Bernhardt, in writing the Shine series.

Born and raised in Texas, Tamara now lives with her husband and five children in Wichita, Kansas. She rarely has any free time, but when the stars align, and she gets a moment to relax, she enjoys reading, taking nature walks, and watching every Star Wars or Star Trek movie ever made.

About the Series: The Olive Kennedy Fantasy Romance Series

When her dragon stepfather in human form unexpectedly visits Olive on Earth, she knows that he probably has dire news. She's right, but still can't tell him that Theht (the evil goddess) is hitching a ride in her body. Enjoyed the amusing chapter where her stepdad tasted pizza and coke (trying to sample Earth's cuisine).

Her new quest is to steal an object from the silverwitch -a powerful female dragon that's probably insane and definitely cruel and sadistic. Olive is no thief but her stepdad has hired a professional thief to help her.

Olive's magic is fluctuating (as if her dwindling funds were not bad enough) when she returns to the magical kingdom of Faythander.

Her sweet romance with Kull the Wult King is a bright spark in her life but it's threatened due to Theht's influence; the nasty barbs directed by Kull's mother and the Wult people don't want a half-elf queen.

Can the dire prophecy be averted? Is Olive doomed to bring death and destruction to both Earth and Faythander?

With breathtakingly exciting scenes including: fighting dragons; racing through a burning city to escape from reygamor (imagine unkillable zombies); dining with cannibals and meeting a living Kitten (no she isn't a garden variety pet cat-if you've read the 1st 3 books - you'll know who I'm referring to) Silverwitch and Deathbringer are just what fantasy readers will enjoy.

I didn't enjoy Goblinwraith and Underworld as much as the other books in the set- since these focused on Heidel (Kull's sister) - a terribly abrasive and unlikeable character in my opinion. Preferred reading about Olive's adventures.

You have subscribed to Smashwords Alerts new release notifications for Tamara Grantham.

You have been added to Tamara Grantham's favorite list.

You can also sign-up to receive email notifications whenever Tamara Grantham releases a new book.