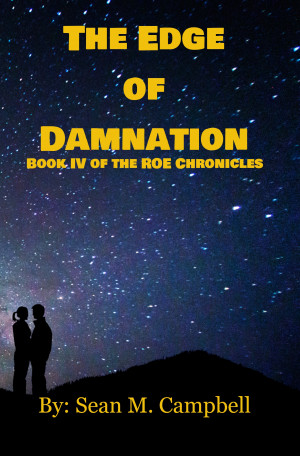 The Edge of Damnation: Book IV of the ROE Chronicles

By Sean M. Campbell
Patricia was caught up in a battle she did not understand. Sasha and the new lead councilor of Earth were battling over the start of a war between psionics and non-psionics.
Somehow, Patricia was key to the outcome. A series of apparently unrelated events which started with Patricia’s sentencing for a crime, ended at The Edge of Damnation. More
Patricia stood in front of the judge waiting for him to hand down her sentence. She had stolen a large amount of money from a bank using her teleportation ability. For most cases involving psionic crimes, the Navy held the prisoners in the Australian Shielded Detention Facility at Australia Base.
The Navy refused to put a fifteen year old girl into that prison.
Now she was sixteen and nearly a year of trial was over. They had gone to extra ordinary effort to monitor and secure her over the last eleven months.
Patricia was doing her best to fight the tears threatening to come to her. The judge was going to order an operation to remove her Malenkov Organ.
As he began to pronounce his judgment, a woman stood up in the back of the room. Her features were hidden and she offered the judge an alternative.
Patricia realized The Sasha Malenkov-Wraith was in the court room, offering to give her a way to keep her abilities.
Patricia had no idea just how wrapped up she would be in the events leading to the Edge of Damnation.

About the Series: The ROE Chronicles

Man is limited in his expansion into space. Even at multiples of the speed of light, it takes weeks and years to ply the starways.

Then a woman is rescued from her slavery as the engine of a new ship. She will change the face of space travel forever. Her family will found a dynasty of passive power. They will stand as the guardians of the human race and its allies.

Also in Series: The ROE Chronicles

You have subscribed to alerts for Sean M. Campbell.

You have been added to Sean M. Campbell's favorite list.

You can also sign-up to receive email notifications whenever Sean M. Campbell releases a new book.