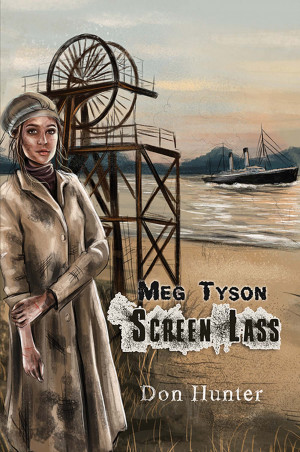 The tiny village is home to Coater Pit, a coal mine, and here, most of the men are colliers and many of the women and girls are screen lasses. That is the destiny Meg has accepted for herself. But one terrifying moment sets Meg on a different path, to a life a world away from Morthwaite.

Little does Meg know that an encounter with the youngest son of the Bensons – Coater pit owners and, essentially, owners of the village – would set her off on a journey that would lead her to Vancouver Island in Canada, where she would get to make a life for herself that she could never have imagined.

Don Hunter grew up in Distington, Cumbria, attended Workington Grammar School and did his national service with 23 Parachute Field Ambulance, Royal Army Medical Corps, before training as a teacher at Chester. He taught secondary school in England and BC. He gained his B.Ed. at the University of BC before joining the Vancouver Province daily newspaper as a reporter and feature writer and, eventually, senior columnist. He is the author of four other books and a credited screen writer. He and his wife, June, have two daughters and three grandchildren, they live in the village of Fort Langley, BC.

You have subscribed to alerts for Don Hunter.

You have been added to Don Hunter's favorite list.

You can also sign-up to receive email notifications whenever Don Hunter releases a new book.