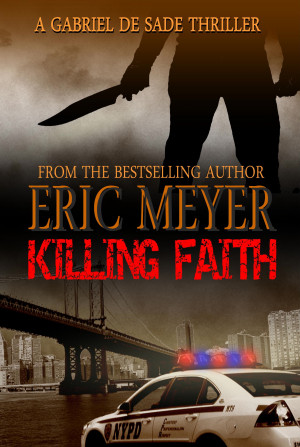 The FBI are also hunting for the serial killer and their evidence points to a Russian Mafiya baron, Grigory Gordieva. The pursuit leads Gabriel to Moscow with an FBI partner, Special Agent Faith Ward. They find themselves pitted against political interference from both American and Russian governments. Yet when they ask for help from the Moscow Militia de Sade finds them both corrupt and on the Mafiya payroll.

Their only assistance comes from an unexpected quarter, a Russian Orthodox Bishop. With his help, de Sade reaches the heart of the Gordieva’s Mafiya operations. The Russian retaliates by kidnapping Faith Ward. With only a discredited Militia detective to help him, he takes on the Moscow Mafiya. De Sade adapts his Delta Force tactics to wage a secret war on the Moscow streets. The action builds to a climax that is shattering and extraordinary.
Available ebook formats: epub mobi pdf lrf pdb html
First 10% Sample: epub mobi (Kindle) lrf more Online Reader
pdb
Price: $2.99 USD
Buy Add to Library Give as a Gift
How gifting works
Create Widget
About Eric Meyer

Eric is UK author of over fifteen books. He is a graduate of University College, Cardiff, where he studied politics. He served part-time in the Commandos, the Royal Marines Reserve, reaching the rank of Colour Sergeant. During his service he was seconded to take part in and lead a number of sensitive and classified missions, as well as undertake instructor assignments in a number of Special Forces schools. During this time he pursued a full-time career as an independent coach and consultant, working with various blue chip and smaller organisations. Eric Meyer has developed a specialty as a motivational coach, and drew heavily on his military experience to give his clients the tools for leadership, initiative and audacity that are the mark of the small unit commander.

Working with a number of authors and experts, he has been co-writer on a number of self-improvement and motivational titles. As an author, his books are sold all over the world in paperback, hardback and ebook format. He writes mainly in the genres of military thriller, and detective thriller. Indeed, his first novel, Devil's Guard, The Real Story, is a fact based novel based on the French IndoChina war in what is now known as Vietnam. With a number of novels set during World War II on the Eastern Front, as well as novels of the Vietnam War, his military experience is reflected in a range of war fiction titles. The detective thrillers are based on an NYPD detective, Gabriel de Sade, a Special Forces veteran.

He has also presented a number of documentary films, mostly exploring historical subjects ranging from early Christian history to the mystical brilliance of Leonardo da Vinci.

Eric is married with three children, and still pursues his military and historical research in his available spare time. He is also a keen runner, and has achieved success in a number of road and off-road races, including fell-running, the challenging sport of competitive running across hill ranges in the countryside. Throughout his career he has combined his extensive and growing knowledge of military affairs with his zest for the latest motivational tools to produce novels that will both thrill and entertain the reader. Current projects include research into the causes and progress of the war in Afghanistan. Currently, Eric Meyer is a full-time novelist.

About the Series: A Gabriel De Sade Thriller

You have subscribed to Smashwords Alerts new release notifications for Eric Meyer.

You have been added to Eric Meyer's favorite list.

You can also sign-up to receive email notifications whenever Eric Meyer releases a new book.