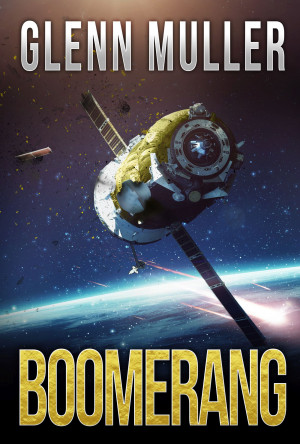 When a top secret satellite crash lands near a small Canadian town, espionage comes to Goderich. It’s Spy vs Spy vs Silas and Clyde, but never count out the locals when they’ve got home field advantage!
Glenn Muller's new homegrown thriller will appeal to fans of Lynwood Barclay, Clive Cussler, and Michael Connelly. Add this breakout novel to your library, today! More
Crippled and out of fuel, Yaogen 18B, a Chinese military satellite is falling out of orbit. As it plummets toward a small Canadian town, with a payload of secret technology, international agents race to find the remnants of the fiery descent.
The Chinese send Soong Zhaojun, an orbital specialist; Alina Zarudneya, a defected Russian rocket technician; and Han Cho, a security officer who has his own agenda. While the Canadian Government dispatch the militia and hope to avoid a costly cleanup, the Americans send over Gord Trumbill, a veteran Homeland Security field agent needing a successful mission to atone for past mistakes.
On their own mission, Silas and Clyde, two satellite-spotting farm boys from Tennessee join forces with the residents to protect the small town's lifestyle from further militarization. Down, though not yet out, Yaogen 18B will bring the World Powers to Goderich - but never count out the locals when they have home field advantage!

Glenn Muller was born in New Jersey, USA, then spent his early years in England before emigrating to Canada where he would attain Canadian citizenship.

After jobs in hotel administration, driver education, computer applications, and bookkeeping, Glenn started his own successful bookkeeping business. Writing, of course, he’s always done for love, not money. Though money is always politely accepted when offered.

Chas Fenn, the protagonist in his debut novel, TORQUE, was inspired by the twelve years he spent as a driving instructor, and would appeal to fans of The Republic of Doyle. The sequel, JACKLIGHTER COPSE, was written in response to the demand for another book featuring Chas Fenn and Detective Inspector Evan Lareault. His other novel, BOOMERANG, was influenced by a life-long interest in Space exploration and would appeal to fans of Clive Cussler, Lynwood Barclay, and Michael Connelly.

Although his genre is thrillers, Glenn natural sense of humour bubbles to the surface, prompting readers to describe his books as “fun-packed” and “just plain awesome”.

Reviews of Boomerang by Glenn Muller

You have subscribed to alerts for Glenn Muller.

You have been added to Glenn Muller's favorite list.

You can also sign-up to receive email notifications whenever Glenn Muller releases a new book.