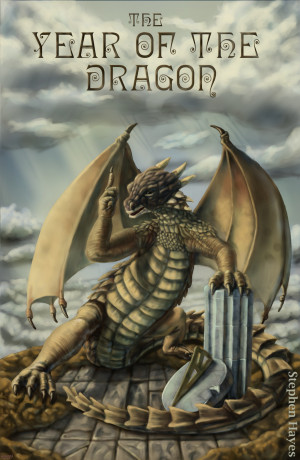 The Year of the Dragon

By Stephen Hayes
Rated 4.00/5 based on 2 reviews
A woman dies on a South African farm, and Richard Rutherford, the lawyer who goes to wind up her estate, discovers that others are prepared to kill for some old Russian ikons she owned. Richard's friend Denis Walters disappears, and soon Richard is driving 1000 miles in search of Denis and King Lobengula's legendary treasure, accompanied by a mysterious hermit and an even more mysterious priest. More
The year is 1988.

On a farm in the picturesque southern Drakensberg of South Africa a woman dies, and a young lawyer, Richard Rutherford, and his friend Denis Walters combine business with a pleasure weekend in the mountains. They will visit the farm to take the first steps in settling the estate. They soon discover that others also have an interest in the estate, or at least some items in it, and that they are prepared to kill for them.

The contentious items seem to be some old Russian ikons, but how they got to a remote farm and why others are so anxious to get hold of them is a mystery. The search for answers leads them to a strange hermit and an even stranger priest, and a drive of a thousand miles in search of King Lobengula’s legendary treasure.
Available ebook formats: epub mobi pdf lrf pdb txt html
First 20% Sample: epub mobi (Kindle) lrf more Online Reader
pdb
Price: $3.99 USD
Buy Add to Library Give as a Gift
How gifting works
Create Widget
Tags: theology south africa icons st george all saints day dragon legends
About Stephen Hayes

Reviews of The Year of the Dragon by Stephen Hayes

I've read this novel twice this year, and it held up well when read again so soon after the first reading. It combines the appeal of Charles Williams's mid-1930s thrillers with a fresh and fascinating locale. I give it four rather than five stars because I wanted more description of the setting and felt the story moved a little too fast sometimes. But it's an accomplished performance and certainly needs to be known to more admirers of the Inklings.

(reviewed 7 months after purchase)
JCFreel reviewed on May 30, 2019

To marry the intrigue, adventure and mystery of fiction to the politics, religion and history of reality is uniquely undertaken in Steve Hayes’ The Year of the Dragon. This novel, set in Apartheid South Africa, follows the history of a set of Russian orthodox ikons from uprising to smuggling to harbouring to murder to kidnapping- all culminating in the mystery of a legend come to life. The author teaches the reader about the significance of the ikons through history, pointing repeatedly to its political influence in societies where the oppressed dare to fight back.

Whether you’re interested in authors like Agatha Christie, for her murder mysteries, Charles Williams for his fantasy novels (which the author attributes this book’s existence to), or even historians writing about the politics of our past, The Year of the Dragon has a way of unifying genre and subject to please every kind of reader.

I appreciated the consistency of the different themes like Secrecy, Necessity, Power (both negative and positive) and Change. Each has a way of meeting the reader at his worldview, taking his hand and walking him through the story. Secrecy shows herself as innocently as the reader at the start; an old collection in a cupboard, a pretty girl observed, but it fast rears a much uglier head as a young boy and a pair of friends get entangled in the details of a gruesome mass murder, and cultish plot, to destroy hope and faith through the acquisition of a saint’s relic.

Necessity and Power are locked in a contest for the upper hand throughout the novel, but each has a darker and lighter side to show. The needs of Richard’s party are at first met with the mysterious appearance of the saint, father Takla Haymanot and the appearance and disappearance of the road to Jeff Davidson’s home, which all serve to grow the faith of the party, especially Denis, to trust in the next step. The needs of the apartheid government, saint George's dragon and historically oppressive regimes that follow the ikon’s history are often met gruesomely, and with a lot more force.

Power as faith follows Richard’s party, constantly challenging their worldviews and religious perspectives. Hayes has a way of setting a dramatic scene with subtle props and making even the reader question what they’re reading. The experience mimics that of the characters’ and both reader and character are challenged by the thoughts that follow. Power also presents itself politically and builds a metaphor with saint George’s dragon from so many different angles, that the reader naturally merges mythology and reality by the time that the ending requires it. I won’t ruin the end of the book by exploring this theme further, but I will say that it was a masterful pinnacle.

The characters in the novel are neither idealistic nor generic. They each have a set worldview, distinct from the others, that evolves as the story plays out. Their beliefs (or lack thereof) are touched by their experiences in different ways, yet, in the end, they are unified. Denis interested me most as an archetypal saint George. His unlikely faith and story make the legend into something relatable and allows the reader to think of the saint as a person. Denis seems swept along his metamorphosing road without purposing the change. He follows his instincts and calls the reader to question the root of their own reasons for agreeing with his actions.

I was pleasantly surprised by the direction and subject of this book and most by how authentically it caused me to question my own worldview. I enjoyed this book for its writing style- simple and easy to follow-, its honesty- expressed through the characters-, it’s unique blend of myth and history and its subtleties. If you are interested in Tolkien, Christie, Williams, iconography or history this book will both surprise and delight.