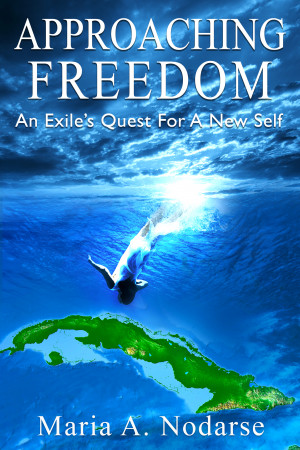 Approaching Freedom - An Exile’s Quest for a New Self

Maria Nodarse is the daughter of Cuban exiles who migrated to the United States in 1960 fleeing communism. After several years working as a bilingual secretary she obtained a scholarship to Columbia University’s School of General Studies. In 1973 she was granted a scholarship to Columbia University Graduate School of Journalism, graduating with a master’s degree in 1974. Her student days at Columbia politicized her and she embraced such liberal causes as the anti-war movement and the feminist revolution. Her ideas and beliefs set her apart from the majority of Cuban exiles she encountered.
While living in Manhattan Nodarse worked as a freelance editor, translator, and commercial writer. In 1979 she made a three-week trip to Cuba with a group of young left-wing exiles, after which she wrote an extensive article about her experience, a story that was picked up by two major newspapers. Upon her return from Cuba she worked for New York publishing houses and traveled extensively throughout Latin America. She resided briefly in London and Madrid before returning to New York.
Nodarse met her husband in Houston in 1988 and followed him to California. With an emergency teaching credential, she started working at a local elementary school teaching the children of immigrant farm workers. Returning to college, she obtained a bilingual cross-cultural teaching credential from California Lutheran University. Nodarse is a 2001 Fellow of the South Coast Writing Project, University of California, Santa Barbara. She retired in 2008 in order to devote all her time to writing. She and her husband live in Camarillo, CA, with their beloved KC Cavalier, Chloe.

Learn more about Maria A. Nodarse

You have subscribed to alerts for Maria A. Nodarse.

You have been added to Maria A. Nodarse's favorite list.

You can also sign-up to receive email notifications whenever Maria A. Nodarse releases a new book.