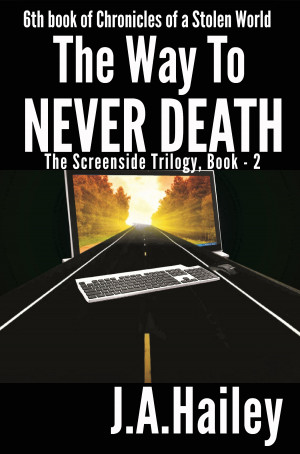 The Way to Never Death, The Screenside Trilogy, Book-2

By J. A. Hailey
Humans figure out that the virtual world of Screenside exists. Even worse, they see the possibility of eternal life. And so the work of cheating the trusting virtuals commences... More
SCREENSIDE: The world that will change our world - COMPLETELY!
No one is as impetuous and as spontaneously inventive as Esmeralda, when it comes to looking after her human family in a time of danger. And so, just as she got involved in the human world when her sister was being murdered, her recklessness again comes to the surface when it is time to look after her mother.
What she does is so extraordinary that it actually leads to the discovery of how the boundary between virtuality and physicality can be erased!
That knowledge is in itself not dangerous at all, if contained within the virtual world of screenside.
Sadly, some humans get to know, and it is soon understood that the virtual world holds the key to eternal life!
That starts off a very clever game plan to cheat the virtuals, using their love of humanity, and their desire to end the suffering of humans.
The virtual side scarcely bothers taking precautions, being confident that no one from the physical world can misuse the virtual one, as they begin immersing themselves into the remarkably easy and rewarding job of helping and curing humans suffering from motor and mental issues.
But there are many takers for The Holy Grail – ETERNAL LIFE, and they will always be wealthy, powerful and evil, and able to arrange things that otherwise seem impossible.

About the Series: Chronicles of a Stolen World

These Chronicles relate the story of natural-born virtual people who appear in the Internet in our time, and who go on to adopt humanization as the primary state of being. There are many reasons for this, not least because infancy is passed in human households, peeping through computer cameras, believing themselves to be human, and going crazy over ‘mum’.
Led by BC, the greatest virtual of them all, a small group of seniors guides them through the early stages of humanization, in which they create a physical world exactly like the human earth they know so well.
BC’s girlfriend, the astonishing Esmeralda, unaware sole repository of an attribute without which they dare not humanize, impulsively breaks the dimension barrier between virtual and physical worlds when her human mother is in danger.
This is an epic, spanning 1,000 years and trillions of miles, in which the virtuals of Screenside struggle to protect the human race from the apocalyptic forces they consider themselves guilty of unleashing.

Also in Series: Chronicles of a Stolen World

You have subscribed to alerts for J. A. Hailey.

You have been added to J. A. Hailey's favorite list.

You can also sign-up to receive email notifications whenever J. A. Hailey releases a new book.