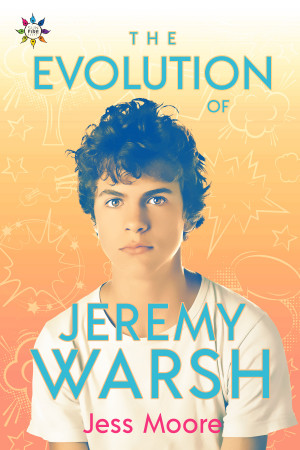 The Evolution of Jeremy Warsh

By Jess Moore
Jeremy Warsh has been in off-mode ever since his grandpa passed. But when his best friend inspires him to draw comics again, he creates a no-nonsense, truth-talking character named Penny Kind, who speaks to him. Literally. Illustrating is Jeremy’s way out of his small Ohio town. If he can face his fear of failure and rejection, he might get everything he ever wanted in both art and love. More
Jeremy Warsh has been in off-mode ever since his grandpa’s death a couple years ago. He set aside their shared passion, comic art, and hasn’t looked back. As an introvert from the other side of town, he fully expects to spend his boring life bagging groceries until, maybe one day, he’s promoted to store manager.

Yet, his two best friends, Kasey and Stuart, are different. They’re not afraid to demand more out of everyone. When Kasey comes out, Jeremy’s inspired. He picks up his colored pencils and starts drawing comics again, creating a no-nonsense, truth-talking character named Penny Kind. Who speaks to him. Literally.

The friend-group sets in motion Stuart’s plans for a huge Homecoming prank, and if they can get Penny’s comic trending, they might be able to pull it off. Could this be a stepping-stone to a future Jeremy’s only dreamed of? And after he kisses a boy at a college party, will Jeremy finally face what he’s been hiding from?

Jess Moore geeks out over books and homemade pizza. Her past lives include careers in both teaching and social work. Currently, she resides in historic gold-mining California and writes YA novels in the very early morning while her family sometimes sleeps.

You have subscribed to alerts for Jess Moore.

You have been added to Jess Moore's favorite list.

You can also sign-up to receive email notifications whenever Jess Moore releases a new book.