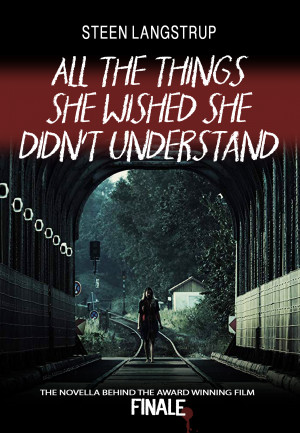 All The Things She Wished She Didn't Understand

Denmark is in the grand final. The streets are bare. Everyone is at home watching the game. At the gas station out by the highway, the two young women working the night-shift are expecting a quiet evening with very few customers...

However, no customers means no witnesses — And they have been chosen to star in a completely different kind of show.

Quote from FilmLinc Daily:
“A gruesome, grisly meditation on the potential for cruelty, exploitation, and violence inherent in surveillance and spectatorship. Gritty and lean in visual style and economical in narrative—which brusquely alternates between a vaguely menacing “before” and a graphically terrifying “after”.”

I’m a Danish writer, living in Copenhagen, Denmark. I have made a living being an author for more than twenty years. My debut was back in 1995 with the horror novel ‘Kat’ which was later filmed. I work in different genres, ranging from horror to suspense and thrillers. My style is often short, minimalistic and dark. Don’t expect happy endings or typical light works of genre. I am not here to please. But you are welcome to come along at your own risk. Just don’t say I didn’t warn you.

I have published 25+ books in Danish. Several have been translated into other languages counting English, German, Spanish, Finnish, Sweedish and Norwegian. Movie rights have been sold to a number of the books, and two have actually been filmed. Radio Plays have been based upon my novels, both in Denmark and in Iceland.

You have subscribed to alerts for Steen Langstrup.

You have been added to Steen Langstrup's favorite list.

You can also sign-up to receive email notifications whenever Steen Langstrup releases a new book.