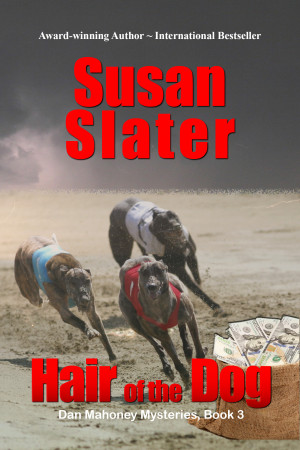 Dan spends his time gathering evidence and chasing leads, while Elaine starts her training as a private investigator. Adding to the mix, Dan's mother, Maggie, decides to move to Florida in her retirement years and meets a suave new boyfriend. Another mystery arises when the two seniors take off on a last-minute cruise.

Dan and Elaine find themselves tracking bad guys from several sectors as the clues come together in this complex story set in the high-stakes world of dog racing and millionaire investors.

“There’ll be much, much more, with whispers of everything from alien experiments to voodoo, before Slater closes out this lively, surprising case, first of a series.” – Kirkus Reviews

“Dan Mahoney is an appealingly resilient character, a welcome addition to the roster of sleuths that make the Southwest a hotbed of current mystery fiction.” —Publishers Weekly

Kansas native Susan Slater lived in New Mexico for thirty-nine years and uses this enchanting Southwest setting for most of her mystery novels. Her Ben Pecos series reflects her extensive knowledge of the area and Native American tribal ways. As an educator, she directed the Six Sandoval Teacher Education Program for the All Indian Pueblo Council through the University of New Mexico. She taught creative writing for UNM and the University of Phoenix.

The first in this highly acclaimed series, The Pumpkin Seed Massacre, reached Germany’s bestseller list shortly after its initial publication as a German translation. Original print versions of the first three titles were outstandingly reviewed in nationwide major media.

In July, 2009, Susan made her first foray into women’s fiction with 0 to 60, a zany, all too true-to-life story of a woman dumped, and the book was immediately optioned by Hollywood.

Late 2017 and 2018 brings a new era to Susan’s storytelling. Secret Staircase Books is releasing newly edited versions of her entire Ben Pecos series in paperback, and brings the series to a whole new set of readers for the first time in all e-book formats.

Now residing in Florida with her menagerie of dogs and canaries, Susan writes full time and stays busy in community theatre and other volunteer projects. Contact her by email: susan@susansslater.com

About the Series: Dan Mahoney Mysteries

Insurance investigator Dan Mahoney travels wherever United Life & Casualty sends him to investigate suspicious claims. But when the mystery goes beyond a missing item or unbelievable tale, Dan finds himself involved in murder.

You have subscribed to alerts for Susan Slater.

You have been added to Susan Slater's favorite list.

You can also sign-up to receive email notifications whenever Susan Slater releases a new book.