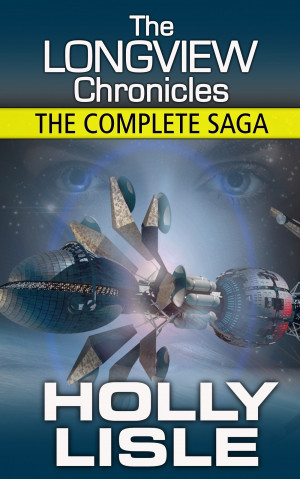 The Longview Chronicles: All Six Stories in One Volume

By Holly Lisle
When the trusted are monsters... one monster becomes a hero.

In one volume with all the original afterwords and one new afterword specifically for this collection. More
In the vast reaches of Settled Space, everything is legal, or at least obtainable privately... for a price. Science has created near immortality, and the wealthy and powerful are buying it to make themselves gods. But these gods require - and create - an endless procession of slaves and sacrifices for their amusement. Until one twisted creature born to be a sacrifice discovers the truth. This escaped slave declares a secret war against corruption, enslavement, and the wealthy, powerful men and women who have declared themselves gods, and made their whims law.

All six stories in one volume with all the original afterwords and one new afterword specifically for this collection.

MEET THE LONGVIEW - An Ancient Spaceship Resurrected To Transport Conspiracy - Inhabited by a crew of misfits fleeing nightmare pasts, with a cargo of Condemned slated to die at the hands of the highest bidders, and with a passenger roster made up exclusively of people NOT who they claim to be, The Longview serves the hidden agenda of an eccentric recluse bent on playing puppetmaster to all of Settled Space.
Available ebook formats: epub mobi pdf lrf pdb txt html
First 20% Sample: epub mobi (Kindle) lrf more Online Reader
pdb
Price: $7.99 USD
Buy Add to Library Give as a Gift
How gifting works
Create Widget
Tags: independence freedom glbt slavery virtual reality human rights libertarian sf interstellar adventure settled space far future dystopia
About Holly Lisle

Before she was a novelist, Holly Lisle was an RN, mostly in the ER. In November of 1992, however, a three-book deal with Baen and quite a few moments of sequential insanity led to her holding a uniform-burning party in her back yard --- which her writers-group friends attended --- putting her nursing license in mothballs, and going full-time as a writer.

In spite of numerous subsequent adventures in financing (she is the master of foods made with canned beans and pasta), she never looked back.

She has now published several million of words of both fiction and nonfiction, and with thirty-two commercially published novels behind her and more than a million books in print, has fully embraced being her own publisher.

Reviews of The Longview Chronicles: All Six Stories in One Volume by Holly Lisle

You have subscribed to alerts for Holly Lisle.

You have been added to Holly Lisle's favorite list.

You can also sign-up to receive email notifications whenever Holly Lisle releases a new book.