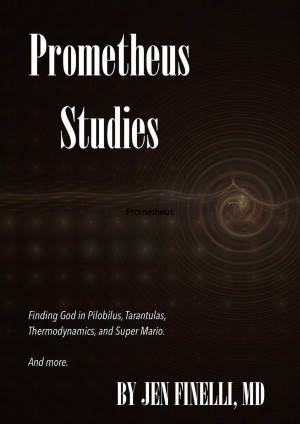 By Jen Finelli
Physician and science fiction author Jen Finelli searches under rocks and in fungi beds for parables and metaphors for a complex divinity.

This is not a book about religious or scientific debate, but a daily series of mystic inspiration found in plants, DNA, vectors, and more. Enjoy! More
From the Introduction:

"In Greek mythology, Prometheus created mankind and saved them from cold ignorance by bringing them fire. As punishment for helping humans, whom the evil rapist Zeus hated, Prometheus was bound to the top of a high mountain. There, alone for centuries but for the comfort of a passing female traveler, bitter wind gnawed at his naked flesh while every day an eagle came to feast on his liver. Suffering man, yet eternal God, pierced in his side, exposed and alone for the salvation of humanity...like Yeshua, called by the Gentiles Jesus, who died to bring fire to our hearts."

Physician and science fiction author Jen Finelli believes God leaves behind traces of pure Awesome in places we usually don't look. We are here to pick up the little glimmers and put them together: to study, through tarantulas, photons, Pilobilus, whatever, the true Prometheus and the fire that is life.

This is not a book about religious or scientific debate, but a daily series of mystic inspiration found in plants, DNA, vectors, and more.

Jen Finelli is a world-traveling award-nominated scifi author who&#39;s ridden a motorcycle in a monsoon, escaped being locked in a German nunnery by the sea, discovered beautiful murals and poetry in underground urban caves, explored jungles and coral deserts, and hung out with everyone from dead babies and prostitutes to secretive Senators. She longs for stories that speak truth about the human condition and shine lights on people often hidden in the shadows of modern fiction. She’s a practicing MD, but when she grows up, she’ll be a superhero. Hit her up before the conference on Twitter @petr3pan, and maybe she&#39;ll bring you some free stuff! If you want cancer-fighting zombie fiction, dinosaur picture books, scientists jumping into volcanoes, or talking cars and peyote, you might like Jen's stuff.

Preview it at: byjenfinelli.com
Check out her upcoming movie: mysweetaffair.com

You have subscribed to alerts for Jen Finelli.

You have been added to Jen Finelli's favorite list.

You can also sign-up to receive email notifications whenever Jen Finelli releases a new book.