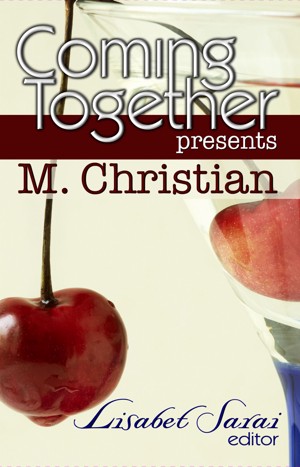 He is the editor of 20 anthologies including the Best S/M Erotica series, The Burning Pen, Guilty Pleasures, The Mammoth Book of Future Cops and The Mammoth Book of Tales of the Road (with Maxim Jakubowksi) and Confessions, Garden of Perverse, and Amazons (with Sage Vivant) as well as many others.

He is the author of the collections Dirty Words, Speaking Parts, The Bachelor Machine, Licks & Promises, Filthy, Love Without Gun Control, Rude Mechanicals, and Coming Together: M.Christian; and the novels Running Dry, The Very Bloody Marys, Me2, Brushes, and Painted Doll.

Also in Series: Coming Together Presents

You have subscribed to alerts for M. Christian.

You have been added to M. Christian's favorite list.

You can also sign-up to receive email notifications whenever M. Christian releases a new book.