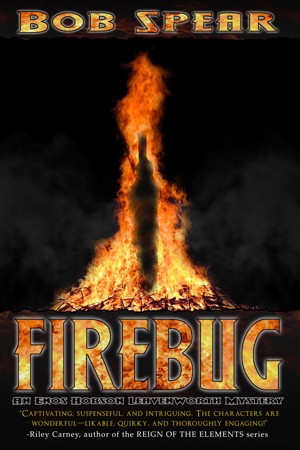 By Bob Spear
Based on a true incident in Leavenworth’s amazing past, retired Army Intelligence LTC Enos Hobson teams up with his daughter, Samantha, and two genealogy experts to track down a homicidal arsonist (The Firebug) who takes revenge on descendants of the ring leaders of a 5,000-man mob who burnt an innocent man at the stake in 1901. Follow the development of Sheba, the Rhodesian Ridgeback hound.

Mr. Spear spent twenty-five years in and around the Military Intelligence business. He has personally trained over 11,000 people in self-defense throughout the world and has authored numerous books and videotapes on personal security and self-defense. As an American pioneer in the Korean art of Hapkido, he is considered one of the world's leading authorities on martial art theory. He holds a 7th Degree Black Belt.

His wife, Barb, and he have owned a bookstore, the Book Barn http://www.abookbarn.com/in downtown Leavenworth since 1981 and in Junction City, KS since 1979. They have four beloved children who have flown their nest. Mr. Spear holds degrees in vocal music, business, and education. He has been a studio guitarist, a vocalist, and a bandleader since the early 1960s, and continues to record and perform with singing, guitar, bass, Native American courting flute, tin whistle, and rhythm instruments. A professional storyteller, Mr. Spear has been on the Kansas Fine Arts Commission's Touring Roster and portrays Buffalo Bill Cody and Burl Ives as a historic performer, http://www.historicperformer.com/

He is also the publisher and chief reviewer for his online book review and book packaging (editing, book designing, book coaching, and project management) companies, http://www.heartlandreviews.com and http://www.sharpspear.com/

You have subscribed to alerts for Bob Spear.

You have been added to Bob Spear's favorite list.

You can also sign-up to receive email notifications whenever Bob Spear releases a new book.