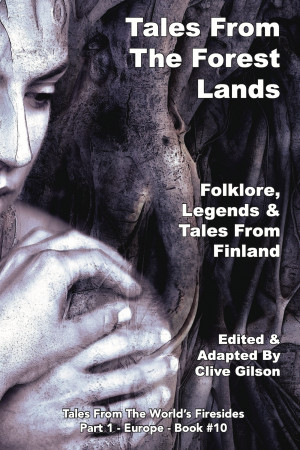 Tales from the Forest Lands

These stories come from collectors such as Andrew Lang and his Coloured Fairy Books, the elusive R. Eivind’s Finnish Legends for English Children and Zacharias Topelius and The Birch and the Star, and Other Stories. Most derive from legendary cycles such as the Song of the Kalevala and earlier collections such as the Lapplandische Märchen. As ever, my voyage of discovery through these stories has been a delight.

I was born in 1962 into a predominantly sporting household – Dad being a good footballer, playing senior amateur and lower league professional football in England, as well as running a series of private businesses in partnership with mum, herself an accomplished and medal winning dancer.

I obtained a degree in History from Leeds University before wandering rather haphazardly into the emerging world of business computing in the late nineteen-eighties.

A little like my sporting father, I followed a succession of amateur writing paths alongside my career in technology, including working as a freelance journalist and book reviewer, my one claim to fame being a by-line in a national newspaper in the UK, The Sunday People.

I also spent 10 years treading the boards, appearing all over the south of the UK in pantos and plays, in village halls and occasionally on the stage of a professional theatre or two.

Following the sporting theme, and a while after I hung up my own boots, I worked on live TV broadcasts for the BBC, ITV, TVNZ, EuroSport and others as a rugby "Stato", covering Heineken Cups, Six Nations, IRB World Sevens and IRB World Cups in the late '90's and early '00's.

I try to combine my love of storytelling with a passion for information technology, and am currently Vice President - Technology with a major UK FinTech company.

You can find out more about my work and contact me at: https://www.boyonabench.com

About the Series: Tales from the World's Firesides - Part 1 - Europe

Tales From The World's Firesides is a grand project. I've collected ‘000’s of traditional texts as part of other projects. Many of the original texts are available through channels like Project Gutenberg, but some of the narratives can be hard to read by modern readers, & so the Fireside project was born. Put simply, I collect, collate & adapt traditional tales from around the world & publish them as a modern archive (and I can think of nowhere better than Smashwords to do this).

Part 1 - Europe, consists of 19 titles covering a host of nations & regions. I'm not laying any claim to insight or specialist knowledge, but these collections are born out of my love of story-telling & I hope that you'll share my affection for traditional tales, myths & legends. These collections of stories bring together magical tales told by firelight since the very first people tried to make sense of the world around them. These tales are universal. These tales have instructed us, have cautioned us, & entertained us for millennia. Read a few of these stories in soft light with a glass of something warming by your side. Read them aloud to friends & family. These stories are magical.

Also in Series: Tales from the World's Firesides - Part 1 - Europe

You have subscribed to alerts for Clive Gilson.

You have been added to Clive Gilson's favorite list.

You can also sign-up to receive email notifications whenever Clive Gilson releases a new book.