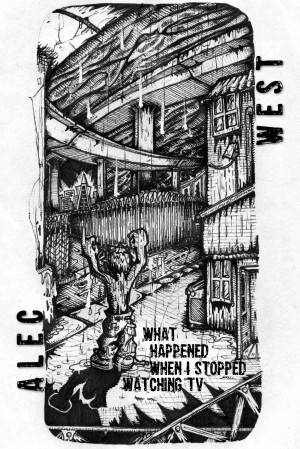 What Happened When I Stopped Watching TV

Alec’s stories are of a young man in Oakland struggling with the politics of rebellion, drugs, and identity. The protagonist provides an adult understanding of childhood trauma, and the path forward. Influential friends shape his humanity. Some thrive, some are gone. These stories are in search of the truth--of Oakland, of manhood, and of peace. More
The sun is too far away to burn an airplane.
But it looks so close.
That’s because it’s very big and very bright.
So airplanes don’t burn when they
Fly near the sun?

Alec West was born in San Francisco and raised on the border of Piedmont and Oakland, CA. He attended St. John’s College in Santa Fe, New Mexico but finished at The Evergreen State College in Olympia, WA with a Bachelor of Arts Degree. He has been published in The Green Windows Anthology 2017, Slingshot Magazine and The Anthology of Poetry by Young Americans.

In addition to writing he has worked with youth alongside such groups as The Beat Within, Chapter 510, Corde-Enfants-Haitiens, and Gateways for Incarcerated Youth. He is pursuing his Master’s in Education as an Education Specialist. He lives in Oakland, CA with his family and divides his time between the East Bay and Marin County.

You have subscribed to Smashwords Alerts new release notifications for Alec West.

You have been added to Alec West's favorite list.

You can also sign-up to receive email notifications whenever Alec West releases a new book.