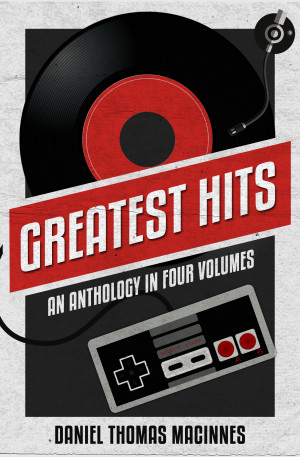 In Greatest Hits, MacInnes presents, in a incisive collection of essays and personal stories, the trivial absurdity and profound brilliance of modern life. These include denouncing the media circus surrounding Michael Jackson's untimely death ("Now Watch the Thriller Zombies Chew On the Corpse"), championing the genius of 1970s Miles Davis ("Get Up With It"), conjuring childhood memories of video games ("Seven Cities of Gold"), and celebrating the animated movies of Studio Ghibli ("My Neighbor Totoro," "Spirited Away").

Like everyone's favorite “greatest hits” albums, this book is a fitting portrait of the artist, and a perfect distillation of a singular and irresistible literary voice.

Daniel Thomas MacInnes is an experienced writer, editor and visual artist, and the founder of the movie website Ghibli Blog. As a pop culture critic and essayist with over 20 years' experience, his writings have appeared in print and digital media, including GamePro, NewType Gaming and Time Out London.

He has contributed to the animation books Mi Vecino Miyazaki and Antes De Mi Vecino Miyazaki, the Discotek Media DVD release Lupin the 3rd: The Complete First TV Series, and was greatly involved in the DVD and Blu-Ray release Horus, Prince of the Sun.

He is the author of multiple popular culture, art and photography books including the following titles:

You have subscribed to alerts for Daniel Thomas MacInnes.

You have been added to Daniel Thomas MacInnes's favorite list.

You can also sign-up to receive email notifications whenever Daniel Thomas MacInnes releases a new book.