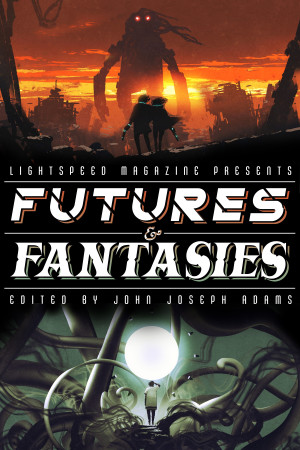 By John Joseph Adams
The stories in FUTURES & FANTASIES run the gamut from mythic, lyrical epic fantasy to far-future space opera... from rough-and-tumble cyberpunk dystopia to historical, tragic fantasy... from post-modern portal fantasy to counterfactual hard science fiction. Dive in and discover the wonders within! More
FUTURES & FANTASIES is an anthology of science fiction and fantasy culled from the pages of the digital short fiction magazine, LIGHTSPEED. In its pages, you will find science fiction: from near-future, sociological soft SF, to far-future, star-spanning hard SF—and fantasy: from epic fantasy, sword-and-sorcery, and contemporary urban tales, to magical realism, science-fantasy, and folktales.

Launched in 2010, LIGHTSPEED is a two-time winner of the Hugo Award, and stories from the magazine have been nominated for major genre awards dozens of times, including the Hugo Award, the Nebula Award, the World Fantasy Award, and the Theodore Sturgeon Award. LIGHTSPEED has published short fiction from a wide variety of authors—from the bestsellers and award-winners you already know to the best new voices you haven't heard of yet.

The stories in FUTURES & FANTASIES run the gamut from mythic, lyrical epic fantasy ("A Love Story Written on Water" by Ashok K. Banker) to far-future space opera ("A Bond as Deep as Starlit Seas" by Sarah Grey)... from rough-and-tumble cyberpunk dystopia ("And You Shall Know Her by the Trail of Dead" by Brooke Bolander) to historical, tragic fantasy ("The Litigation Master and the Monkey King" by Ken Liu)... from post-modern portal fantasy ("Not by Wardrobe, Tornado, or Looking Glass by Jeremiah Tolbert) to counterfactual hard science fiction ("The Old Equations" by Jake Kerr).

John Joseph Adams is the bestselling editor of many anthologies, such as Epic: Legends of Fantasy, Other Worlds Than These, Armored, Under the Moons of Mars, Brave New Worlds, Wastelands, The Living Dead, Federations, The Improbable Adventures of Sherlock Holmes, and The Way of the Wizard. He is a four-time finalist for the Hugo Award and the World Fantasy Award. He is also the editor and publisher of the magazines Lightspeed and Nightmare, and is the co-host of Wired.com’s The Geek’s Guide to the Galaxy podcast.

You have subscribed to alerts for John Joseph Adams.

You have been added to John Joseph Adams's favorite list.

You can also sign-up to receive email notifications whenever John Joseph Adams releases a new book.