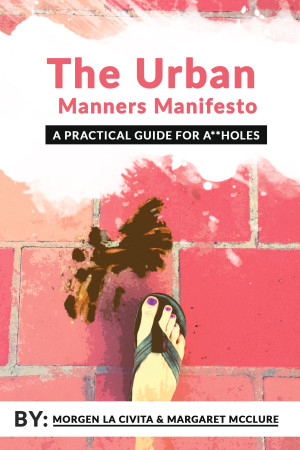 The Urban Manners Manifesto - A Practical Guide For A**holes

By Morgen La Civita
& Margaret McClure
A practical, down-to-earth and no holds barred guide for conducting yourself like a civilized member of society while simultaneously visiting, living or working in a city. Thinking about grabbing a lamb kabob before getting on the bus? Not sure if cleaning your ears can wait until you get home? Don't worry! We've got you covered. More
Social etiquette can be challenging even in the most controlled environments. Luckily, there are plenty of guidelines out there for properly conducting yourself at dinner parties. But what if your life doesn't revolve around seven-course meals and country clubs? What if getting through your day involves crowded buses, long lines, public restrooms, and randomly placed landmines of dog s**t?

Maybe you're new to the city, just visiting, or you're a native. Whatever the case, it's tough to know all the proper rules of society in the battle conditions of modern urban sprawl. After all, good manners require the awareness that you are not the only person in the world, and that can be hard to do when you're just trying to get through your day in one piece.

But acting like a human being isn't as hard as you might think. In this handy little book, Morgen and Mags tell you everything you need to know about urban etiquette. They lay out the ground rules of the do's and don'ts in a way that's fun, fast and full of info easily understood by everyone - even a**holes.

Thinking about grabbing a lamb kabob before getting on the bus? Wondering if hitting on that hot one sitting next to you on the subway is a good idea? Not sure if cleaning your ears can wait until you get home? Confused about whether you should you flush the toilet after using it or leave it there as a way to mark your territory at Starbucks? We've got you covered!

We're going to help you with those tough decisions and get you acting like a responsible member of society in no time. Join us for some personal anecdotes, practical advice, and some very gross pictures.

Morgen La Civita and Margaret McClure are both award-winning independent singer-songwriters, music producers, and moms. They have found success in the tough music industry, but each has had to deal with many side hustle jobs to get the bills paid. They both grew up in urban areas with plenty of bus riding, standing in lines and exposure to large crowds.

Morgen is East Coast and grew up in Jersey City, NJ, lived in Queens, NY for a bit, went to a high school in Greenwich Village (after being unceremoniously expelled from two others which she would like you to know was totally not her fault), and then had to have speech therapy to lose the accent before beginning a career in voice-overs and singing because apparently, the letter “r” is a thing. She has three children and currently lives in Easton, Pennsylvania. Her hobbies include going to church (a.k.a the thrift store) vaping like there will be a vape prohibition any minute, and binge-watching depressing documentaries that pretty much make her want to put her head in an oven.

Mags was born in the heart of LA and has lived most of her life on the West Coast from Hollywood to San Diego. She has logged long hours in LA traffic. Shitty cars, overcrowded buses, trains, and smelly taxis are nothing new to her. She raised two girls as a single mom, singing demos by day while doing gigs with a rock band in dive bars at night. Trips to Mexico, dogs, surfing, and yoga are her favorite things nowadays but she is not opposed to alcohol in case you were wondering. In her lifetime she has gone from living in her car to extensive worldwide traveling. Most of her air travel experience has been in back middle seats but she does value personal space and she has used her miles to upgrade to first class more than once.

The pair met in a music industry forum and became friends when they noticed each other's common sense and manners which stood out as assholes outnumbered them.

Morgen and Mag’s extensive life experiences and insight make them pretty fucking sure they are experts on urban etiquette, and you will be too when you read this book.

Warning: Do not read this book out loud to small children unless you want to be the person solely responsible for teaching them the words “fuck”, “twat” and “jackass”. And no, we will not be releasing a clean version. Feel free to redact on your own though. Your kids could benefit from this shit.

You have subscribed to alerts for Morgen La Civita.

You have been added to Morgen La Civita's favorite list.

You can also sign-up to receive email notifications whenever Morgen La Civita releases a new book.