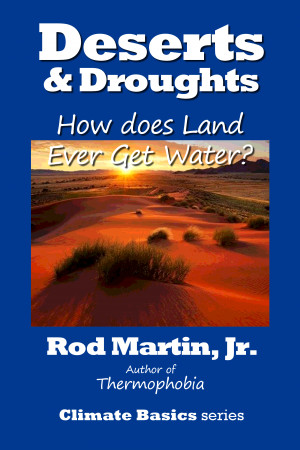 Deserts & Droughts: How Does Land Ever Get Water

* Chapter 1 presents the Warming Alarmist claim, quoting several sources, and critiquing their statements with critical thinking and logic.
* Chapter 2 presents the counter-claim, backing it up with quotes and sources.
* Chapter 3 explains what's really going on in nature, how droughts occur, and our big question -- how land ever gets water in the first place.
* Chapter 4 presents empirical evidence from numerous sources that back up the counter-claim, effectively debunking the Warming Alarmist position

Sequel to #1 Bestselling Book, Climate Basics: Nothing to Fear

About the Series: Climate Basics

Reviews of Deserts & Droughts: How Does Land Ever Get Water by Rod Martin, Jr

You have subscribed to Smashwords Alerts new release notifications for Rod Martin, Jr.