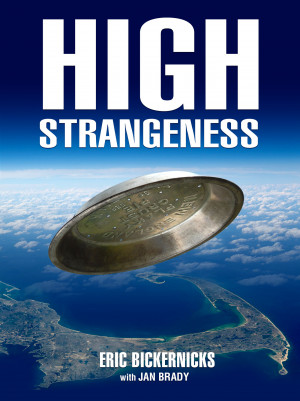 Ken Wakeman, a skeptical UFOlogist who seeks the truth about paranormal phenomenon, struggles to discredit the myriad of crackpot theories out there. Melissa "Mel" Howard, a reporter for a small Cape Cod newspaper, copes with the seasonal tourist invasion and its accompanying anxieties. When the Cape becomes the national focus over a rash of UFO sights, they join forces to get to the bottom it.

Despite denials from town officials and the military that UFOs have landed, mass hysteria overcomes the seaside community. In addition to the frantic humans, Astro, Ken’s Golden Retriever has also been acting strangely.

Eric, a serial entrepreneur, non-conformist existentialist, takes you through the steps of launching his own home-based, food concession business. You'll read about his encounters with weird customers, relentless health department officials and inept event coordinators. During this time, he also was documenting everything on video, and this journal links to over 80 videos which show you exactly what transpired.

I've burned up most of my life doing video and film production. Had some success early in life with some nationally televised comedy shorts, but when I tried to 'grab the golden ring' with a full length feature film, my body was thrown from the carousel.

I embraced the meathead football culture when I was in my teens which culminated in a decade of martials arts training in my 20's and 30's. I've now matured into intellectual pacifist who can still someone's ass.

I've been self-taught on multiple musical instruments, and have composed music (both loud and soft), in many different styles. I've had some success with funny novelty song compositions. For my efforts I've recieved (1) BMI check and a case of tinnitus.

In my quest to avoid being beholden to a boss or an authority figure, I've pursued online marketing and kettle corn concessions. One allows me to make money at home in my underwear, while the other makes me see things as they stand - all my efforts ultimately turn into shit.

Arriving this late in life, I will now call myself a writer. I certainly have a lifetimes worth of thoughts and stories to tell, but I've only brought them up to the determent of my friends. I'm going through some non-fiction books at the moment, and will have a couple of sci-fi stories to tell in the future.

The end of the world doesn't come with a bang, or a whimper, but a whine. And it doesn't come in a rain of fire on Washington, Moscow or London, but as an invasion of hovering lights and rotting doggie delights on Cape Cod.

When the tourists flee across the canal, Bigfoot, UFO's, Men in Black in Hawaiian shirts, dead aliens, tabloid journalists, conspiracy theorists, locals, a sex maniac and his cult following, not to mention the dog, take over the place.

Two groups of virtuoso faker-outters of high strangeness, completely unbeknownst to each other, collide head on, while making crop circles. What happens when even the fakers are freaked out by geometry and religious symbol spewing UFOs, left me turning pages, laughing out loud in the middle of the night, and then, wondering what that smell might be, and looking under the bed for something horrible, the dog dragged in.

This fast paced, hilarious, adventure romp is told in the first person by 4 people. Well... not exactly people. Two of them are human, one of them is alien - I'm guessing from the icon above its chapter headings - who speaks in binary (I didn't decode it, but there's a fun puzzle for a lonely Saturday night with a sack of kettle corn), and one of the narrators is the dog. Yes, the dog, who develops a Buddha-like Zen intellect, an interest in basketball, an obsession for revoltingly smelly bones, and a sense of timing that had me howling with laughter.

I was thrilled to receive an invitation to download 'High
strangeness' as I recall the enjoyment of 'Artifice' last year.
I had quite good fun reading both almost straight thru.

This UFO story is not so much about UFO's as the effect of seeing
one, impinges on the minds of the public at large. Throughout the
tale I wondered about the large ship, and admit that I did not
figure it out until it was explained.

I notice the writing team was outfitted in the antique 'Tin foil
hats' I would recommend they replace these with the much more
reliable 'Mylar lap seamed' full cranium type. Just load up the
old 'Singer' bobbins with metallic thread and you quickly will
have sufficient RF protection.

All three members or four ,of the writing team did a nice job, and I
wonder if you would consider selling the dog?

You have subscribed to alerts for Eric Bickernicks.

You have been added to Eric Bickernicks's favorite list.

You can also sign-up to receive email notifications whenever Eric Bickernicks releases a new book.