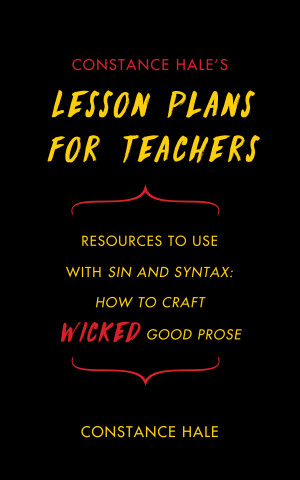 By Constance Hale
Constance Hale’s Lesson Plans for Teachers offers two semesters worth of material to prepare novice writers not just for college but for a lifetime of professional-grade work. Chock full of clear-headed explanations, dynamic exercises, and inspiring prompts, these lessons will transform the way novice writers approach the blank page. More
Are you a teacher trying to help struggling writers perk up their prose? Would you like to learn a little about language yourself as you put together lesson plans for your wards?

Constance Hale’s Lesson Plans for Teachers offers two semesters worth of material to prepare novice writers not just for college but for a lifetime of professional-grade work. Chock full of clear-headed explanations, dynamic exercises, and inspiring prompts, these lessons will transform the way novice writers approach the blank page. The lesson plans complement and expand upon the 2013 edition of Sin and Syntax: How to Craft Wicked Good Prose (Three Rivers Press, 2013). They contain materials Constance Hale has road-tested in workshops all over the United States and with students of varying ages and levels of accomplishment.

The first set of lessons are organized to correspond to chapters of Sin and Syntax. “Working with Words” and “Working with Sentences” is especially appropriate for those wanting to work on syntax. but introductory material at the beginning of each lesson gives you some room to play before you jump into heavy grammar. Teachers working with accomplished writers at a more advanced level, might want to skip right to the second set, “Making Music”. Depending on how classes are organized, teachers can stretch each set of lessons out for an entire year, or compress them into a semester or even a quarter. In some cases, there are different iterations of exercises for different age levels. When there are handouts (or keys to answers), they are collected at the end of the chapter. Handouts can also be downloaded from www.sinandsyntax.com for easy printing.

Constance Hale is the author of the bestselling writing guide Sin and Syntax, as well as Vex, Hex, Smash, Smooch and Wired Style. She has been a staff writer and editor at the Oakland Tribune, the San Francisco Examiner, Wired, and Health magazines; her freelance writing has appeared in Afar, The Atlantic, Smithsonian, National Geographic Adventure, The Los Angeles Times, and Honolulu, among others. Her eight-part series on the sentence launched the “Draft” series on The New York Times Opinionator. She directed the program in narrative journalism at the Nieman Foundation at Harvard and teaches writing at UC Berkeley Extension and the San Francisco Writers’ Grotto. She has edited three dozen books, turning narratives about serious subjects into serious page-turners. She covers writing and the writing life at sinandsyntax.com.

You have subscribed to Smashwords Alerts new release notifications for Constance Hale.

You have been added to Constance Hale's favorite list.

You can also sign-up to receive email notifications whenever Constance Hale releases a new book.