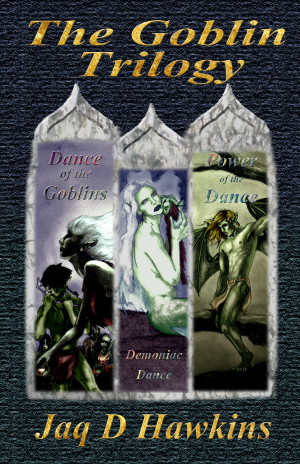 By Jaq D Hawkins
Rated 4.50/5 based on 2 reviews
The complete collection of the Fantasy trilogy that brought Epic series to a new generation. The goblins lived unseen by man for many generations and were forgotten, consigned to legend, but a fluke sighting when a man wanders into the entrance of a forgotten underground transportation system revives an ancient war between the species. More
A saga spanning three generations in a feudal world governed by magicians.

Will you dare to enter a world of darkness among the goblins to join into The Dance?

The complete collection of the Fantasy trilogy that brought Epic series to a new generation. World building based in the foundation of Traditional Fantasy.

Dance of the Goblins

The goblins lived unseen by man for many generations and were forgotten, consigned to legend, but a fluke sighting when a man wanders into the entrance of a forgotten underground transportation system revives an ancient war between the species, originated by misunderstanding and prejudice of a species which appears alien to the superstitious humans.

A young girl running away from an unwanted marriage finds a new life among the mysterious magicians in the land across the river. What she didn’t bargain for is the presence of the goblins who have befriended her benefactors.

Power of the Dance

Khemael is a creature of beauty and grace with a mostly human appearance. His love of stretching his leather-like wings and flying freely in the world of men brings far too much attention to the existence of the goblins. Haghuf knows that the inevitable responsibility will fall to him to destroy Khemael who, in the world of the humans, would be called his grandson.

Worlds of magic await to be discovered in the complete series, The Goblin Trilogy!

Old school Fantasy for readers of The Lord of the Rings, Dragonlance, Songs of Ice and Fire, and Wheel of Time.

“mesmerizing, breathtaking, and a treat for the imagination.”

scroll up and buy to start the adventure today!

Jaq D Hawkins was originally traditionally published in the Mind, Body, Spirit category, but moved to indie publishing soon after releasing her first Fantasy fiction novel, Dance of the Goblins. She currently has one book on chaos magic in release, The Chaonomicon, and a new, complete volume about Elemental Spirits is to be released July 2018.

She currently has five fiction novels released which include the Goblin Series (Dark Fantasy), comprised of Dance of the Goblins, Demoniac Dance and Power of the Dance, and her Steakpunk novel, The Wake of the Dragon (Airship Pirate Adventure) is soon to be followed by a follow-up novel, The Winds of Winter Storms.

A science fiction novel called The Chase for Choronzon is in progress, as well as further writings in occult subjects.

Jaq lives in England with her family and works on amateur filmmaking when she isn't writing. Most of the time she juggles deadlines between the two. She is a strong advocate of human rights and equality, which is reflected in her Fantasy stories through diversity in central characters.

I thoroughly enjoyed the books, a true work of masterful writing!!!!

(reviewed 43 days after purchase)
Edward Collins reviewed on May 7, 2020

Great story! I have just finished the trilogy and enjoyed every moment, I always suspected there were Goblins about.

You have subscribed to alerts for Jaq D Hawkins.

You have been added to Jaq D Hawkins's favorite list.

You can also sign-up to receive email notifications whenever Jaq D Hawkins releases a new book.