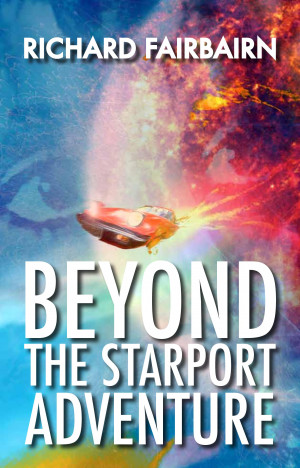 Beyond the Starport Adventure

Matt Skyman and his father planned a vacation to the furthest reaches of explored space, but Sean Skyman did not live to share the wondrous trip with his beloved son. Years later, Matt finally is able to make the journey on his own to honor his father's memory.

A freak accident sends the huge passenger ship hurtling into an undiscovered alien world, devastating an entire city and killing millions. Believing the incident to be an act of war, the Enrilean Empire retaliates with devastating effect. Unprepared and outmatched, Earth’s meagre space fleet battles for survival as a disastrous first contact explodes into all-out interstellar war.

His debut novel Beyond the Starport Adventure is listed as one of "The 30 Best Self-Published Books of All Time", but author Richard Fairbairn hasn't rested on his laurels. He's written some hard-hitting dark science fiction, along with several action and adventure stories now in beta stage. The fan-favorite Bullet series is ongoing, with the second novel expected early into 2020!

Richard drives a flame-red 1978 Triumph TR7, holds a brown belt in karate, and is an amateur astronomer.

Reviews of Beyond the Starport Adventure by Richard Fairbairn

Beyond the Starport Adventure by Richard Fairbairn
Starport Adventure opens with a mystery. Captain Chris Aldridge, who is part of the lunar expedition to the dark side of the Moon, comes across an alien spaceship with the word “Bullet” written across it in English, and Flight Control wants him to blow it up without even exploring it. The mystery engages the reader right away. We have questions that we want answered too. Richard Fairbairn, however, doesn’t give the reader immediate answers. Instead, he slowly expand the mystery as he brings us along on the Starport Adventure. The title comes from a conversation in the book between the young Matthew Archer and his father as they imagine what it would be like to leave Earth and travel the stars together.
Along the way, we meet some compelling characters like the time traveling Celeste Foster and her Triumph TR7 automobile/spaceship (it really works), or sympathetic Cass Linn, a robot who tenderly cares for her father, Jann Linn, the Relathon scientist who develops weapons for the people, the Enrileans, who destroyed his home. Fairbairn does a good job with his characters. They very quickly become real as Fairbairn reveals them scene by scene to us.

My favorite part of the book is the central mystery and how Fairbairn plays with your expectations as you make your way through the story and the changing mysteries. Fairbairn does a very seamless job of updating the classic space opera with elements of a modern thriller. The book is told sequentially in time as indicated by the year at the beginning of each section. This works better in the earlier part of the book when the year is changing regularly, but as we enter into the final year of the book I wish that we had more dating information like the day, the month, even the time to the second. I also think that this would increase the tension as the plot unfolds.

I enjoyed the book and would recommend it. This book deserves much wider audience and exposure. It would be good for reading at the beach or during the winter doldrums. It could easily be read on a commute because the sections are very manageable.

I look forward to reading more of Richard Fairbairn in the near future.

You have subscribed to alerts for Richard Fairbairn.

You have been added to Richard Fairbairn's favorite list.

You can also sign-up to receive email notifications whenever Richard Fairbairn releases a new book.