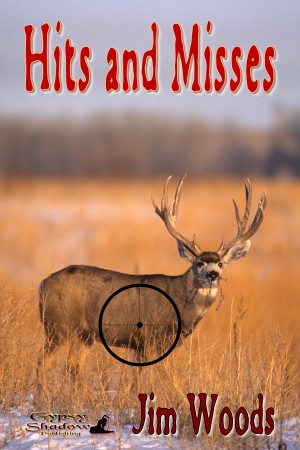 By Jim Woods
Personal hunting adventures in North America, Central America and Europe for birds and big game; an onerous paid job but someone had to do it. More
These accounts of shooting birds and hunting big game mostly relate the author’s adventures in North America--Canada and The United States. Game species encountered, or hoped to encounter, include mule deer, whitetail deer, blacktail deer, pronghorn antelope, elk, bear, turkey and geese. But by convenience, and necessity because all his hunts don’t fit neatly into the confines of North America, and the author had no other place to tell a couple of unique hunt stories, this volume also includes reports of dove hunting in Honduras and red stag in Spain. Mainly, this collection tells the story of one hunter who just happened to be a writer and whose job sometimes required him to go hunting, making him, if not a PH (professional hunter) then perhaps a PTPH (part-time) or a SPH (semi). Either way, for him it was a dream job.
Available ebook formats: epub mobi pdf rtf lrf pdb txt html
First 20% Sample: epub mobi (Kindle) lrf more Online Reader
pdb
Price: $0.99 USD
Buy Add to Library Give as a Gift
How gifting works
Create Widget
Tags: hunting game shooting deer bear turkey gypsy shadow quail geese elk jim woods doves pronghorn exotic game wild boars monteria red stag
About Jim Woods

Jim Woods writes novels authentically set in South Africa—The Lion Killer, The Outlander, and Gemstone (in work); and short stories, stand-alone and in collections, in worldwide milieus. He has traveled worldwide to some eighty countries, therefore has plenty of exotic locales on file to choose for his next one. Much of his world travel has been for big game hunting; this and his background as editor with Petersen’s Hunting, Guns & Ammo and Guns magazines, frequently brings firearms into play in his stories. He’s been at the muzzle-end of guns too; in Angola as prisoner of ugly mercenary Cubans armed with ugly AK-47s, but that’s another story.

Reviews of Hits and Misses by Jim Woods

You have subscribed to Smashwords Alerts new release notifications for Jim Woods.

You have been added to Jim Woods's favorite list.

You can also sign-up to receive email notifications whenever Jim Woods releases a new book.