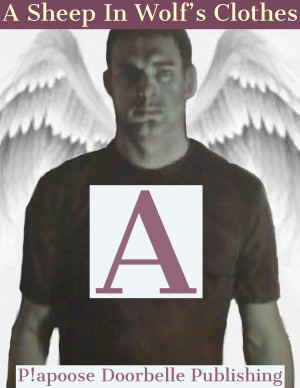 A Sheep In Wolf’s Clothes

By Papoose Doorbelle
The third volume of the Torture Trials series offers a an angel pretending to be a demon in hell and is identified by the others. It offers a surprise ending to conclude the trilogy of how one man stood against an army of witches.

Ages 13+ More
The third installment of the Torture Trials series promises to be the most gripping and thrilling volume in which the anti-hero describes in uncannily realistic details the inner workings of the maze he was held captive in inside the forest and the witchcraft that his captors performed to slowly murder him as a whole society stood by an either helped or watched.

The escape from the forest is only the beginning as the antihero slowly slips into madness as he tries to conform in a society outside the gates of the hellish forest he escaped with his demon accomplice. The antihero accepts his fate as a messenger from heaven and details the methods in which he calls upon God’s help to exorcise the demon of the evil inside of her as they prepare for the final conflict in which the whole forest is burned to the ground, and its inhabitants returned to hell.

The story unfolds with the usual dose of philosophical retrospective and science fiction theories injected throughout.

Scratch that. I came up with something far more interesting. Sorry witches. I got bored of writing about you. Bye!

Welcome the Age of Enlightenment. I will show you the Way. It is available to the world. The answer is inside of you. All you have to do is realize it. I will open the door. You will walk through it. Everyone will become enlightened. It is now the Age of Enlightenment. Somewhere along the way, the fiction stops, and the truth emerges. Be true, be brave, be good, happy reading.

I'm a writer and junk. But I wasn't always a writer. Truth be told, I was pretty terrible in all my English classes as a child. I was always good at math and science, so teachers never really cared too much about my grammar and language mastery. To boot, I had horrible ADHD. I still do, but as a child, it was much worse. It was so bad in fact, that when someone spoke to me, by the time they got to the second word in the sentence, I had forgotten the first word. If you read the book "Am I God, Gobland?" I tell you all about it in great detail.

Most of my books are from personal experience. Okay, scratch that, that's a total lie. Everything I write is completely made up wild fiction that I imagined. My imagination is so far out and bizarre and original that sometimes I have to lasso it in and tame and contain it so that it doesn't spiral out of control beyond the bounds of acceptable literature.

When I was young, people (read: adults) would always tell me what a wild imagination I had. I never understood that. To me, I wasn't imagining anything; I was just trying to understand them. But in so doing, my imagination would fill in the blanks, and what should have been a clear picture of the reality I was living in became a whole assortment of fabricated fantasies I assumed were true based on the information I was given.

Unfortunately, I'm a non-conformist. What does that mean exactly? Well, for one, it means that I refuse to relinquish my imagination in exchange for the reality I should accept as my existence. There is more to life than meets the eye. In my humble and unforgiving opinion, we are all at fault for allowing ourselves to be convinced that we can exist without imaginations. Worse yet is the belief that our imaginations are strictly for creating illogical forms of manipulations to trick each other.

That is a sad state of affairs, but it is not the path I have chosen. I have written on a number of topics/genres. But moving forward, I'm going to write children's stories. A collection of children's stories to be exact. And that series starts with the epic saga titled "Zen of Gob Goblin."

But there are things I do care about. I care about suffering. I think suffering is the worst thing a being can experience in life. Think of a poor animal that has been run over by a car and lays there in the road half alive, bleeding, but not dead. That is horrible suffering. It's bones crushed and mangled. No chance of survival or recovery. It just lies that and waits until it finally dies. Every second of that time feels like an eternity to that animal. That is suffering that I cannot stand. But of course, there are other forms of suffering I care about as well. We all suffer. We are born into suffering, and there is an escape, a nirvana if you will.

That of course brings me to my next point: my religious beliefs. I was born Jewish. I did not have a choice in that matter. I think it's very odd that people find fault in others for things that are beyond their control. Irregardless, I am still Jewish. I will never stop being Jewish. Accept for this one point: I studied a lot of Buddhism. I also studied a lot of Taoism, Hinduism, Reflexology, Reiki, and the list goes on. Am I Jewish? Maybe. Perhaps through the perceptions of others who only see what their limited minds allow them to see. I no longer have any religion that can be defined in relative terms within the confines of our language. Having said all that though, I still believe in God. All the Buddhism and other eastern philosophies and anything else will never take away my undying pledge and love for my Creator.

I speak a great deal about that in some of my earlier books. Not so much in the children's books, but if you're interested in a philosophical read that will have you questioning the very reality you believe you are in control of, then by all means, give my first few books a try. I can promise you this: you've never read anything like them before.

What else? Why and how am I a writer now? I wrote a book back in 2006. It was a user manual for a financial company in midtown Manhattan. Possibly one of the oldest financial firms in existence if memory serves me (it doesn't). I thought nothing of it, but they loved it. They praised my writing as amazing and talented, and off I went into a career as a technical writer. It wasn't long before I had a firm grasp of the English language that rivaled the very grammar style guides that I used to perfect my language skills and knowledge.

Then reality took a turn for the strange. Everything I thought I knew came into question. All the petty and trivial problems and squabbles of the past became mere illusions from which I awoke like a hazy dream. I saw passed the bounds of my own existence. I found enlightenment. I found the answer. I found everything I was looking for. And with that came enemies. I found I had a lot more enemies that I ever thought I would. That's nice. They care enough to hate me. So cute. I wish I could say the same, but the truth is I don't hate them. They get filed in the "shit I don't care about" folder I just threw in the trash. Sorry (read: not sorry)! Yeah, I apologize, but if you hate me, the feeling is not mutual. That's your hang up. Go see a shrink and get that hate sorted out.

So now what? You guessed it. Children's stories. Perhaps more like pre-teen stories. Thing is though, I don't care about money, and I'm not in it for the fortune and fame. I was going to create this gigantic educational solution for future generations, but yes, you guessed it, I just don't care. So, this will be a slow process. It's not that I can't write fast; it's that I have no reason to. I write because I have too. Because the stories sit in my brain like heavy rocks weighing down my imagination until I release them to paper. So, when the next story begins to become a burden, I'll write that one too I guess. But I'm in no rush. Enjoy the ones I wrote so far, and maybe one day, there'll be more.

About the Series: Torture Trials 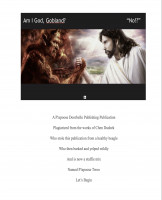 A series/collection of intertwined / interwoven installments of loosely related volumes, each containing short stories related together by a common theme and sharing characters and plots across editions. The only real binding element to these novels is the drive and inspiration that fueled the spilling of ink on the topics / subjects.

Between God and Satan, every man must choose his loyalty. One man decided on God, but found himself to be the only one among millions of devil worshippers, some unaware of their allegiance by virtue of their own sins. However, with only his faith to guide him, that man survived every attempt on his life and every attack on his virtues. That man was me. I’m a writer. These are those stories. Happy reading. God bless. 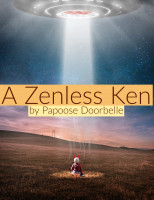 You have subscribed to alerts for Papoose Doorbelle.

You have been added to Papoose Doorbelle's favorite list.

You can also sign-up to receive email notifications whenever Papoose Doorbelle releases a new book.