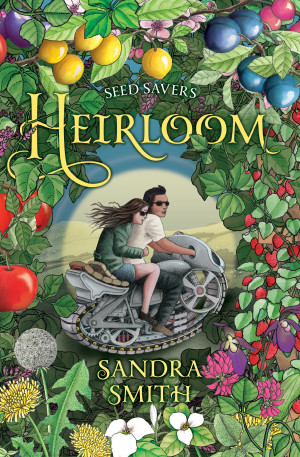 By Sandra Smith
In this third installment of the futuristic Seed Savers series, Lily travels cross-country searching for her missing father. Clare and Dante, meanwhile, enjoy life on a farm in Canada while learning more of the shocking history of how gardening became illegal in the United States. More
It's late in the twenty-first century and large corporations have merged with U.S. government agencies to control the nation's food supply. Gardening is illegal and most people no longer know what real food is.

Thirteen-year-old Clare and her brother Dante have escaped to Canada where the old ways still exist. There they make friends with the roguish Jason and learn the political history of their own country's decline of freedoms.

Meanwhile, Lily, the friend who was left behind, begins a journey to find the father she never met--a former leader in the ill-fated Seed Savers rebellion of fifteen years earlier. From Florida to the Smoky Mountains, Lily follows the signs in search of her father and is helped along the way by the quirky characters she meets. Not to mention the attractive Arturo who shows up midway to "protect" her.

Heirloom seamlessly weaves the gentle agrarian story of Clare and Dante together with the swiftly-paced adventure of Lily and Arturo. Themes of family, empowerment, and politics meet in this futuristic tale nostalgic for the past.

Price: $5.99
$2.40 USD
Buy with coupon Use the code AGB60 at checkout for 60% off during our site-wide promotion!
(Offer good through April 20, 2020 )
Have a better coupon?
Add to cart, then apply your coupon
Add to Library Give as a Gift
How gifting works
Create Widget
Tags: scifi adventure environment multicultural futuristic series middle grade female protagonist preteen diverse characters
About Sandra Smith

Sandra Smith grew up on a farm with a tremendously large garden. She maintains that if you can't taste the soil on a carrot, it's not fresh enough. Although she now lives with her husband and two elderly cats in the city, she still manages to grow fruit and vegetables on their lot, as well as tend to a couple of egg-laying and friendly hens.

Smith has been writing since she could hold a pencil, although the lettering she left on her grandmother's books sometimes contained a reverse capital R. In high school, she won awards for her poetry and short stories, and later was an editor on her college newspaper. Upon graduating with a degree in Communication Arts, Smith accepted a job at a small newspaper in eastern Oregon. She later declined the offer, choosing instead to teach English in China. Though she had an idea for a novel or memoir back then, the only writing produced were the many letters home detailing her exploits to friends and relatives.

After China, Smith spent many years teaching in private and public schools, filling hoards of notebooks with her writing--though mostly lesson plans. Along the way, she has written essays, newspaper articles, children's books, and poetry, very little of which she bothered to publish.

Smith is the author of the Seed Savers series, a middle grade/YA series set in a future where gardening is illegal and real food unknown. She gardens and writes at her home in the beautiful and green Pacific Northwest.

You have subscribed to alerts for Sandra Smith.

You have been added to Sandra Smith's favorite list.

You can also sign-up to receive email notifications whenever Sandra Smith releases a new book.