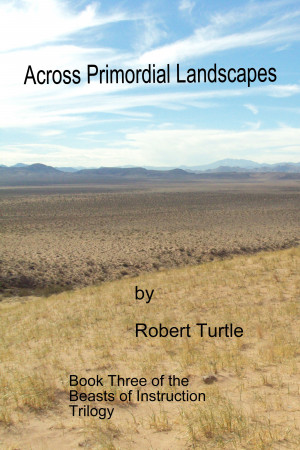 Beast Gur and his mate Briza become deeply involved in the affairs of the River Kingdom of the water primates. It's a dangerous move, for water primates are taught early that war will be the stage for their finest deeds. Beasts aren't interested in living by a warrior code, so the fate of the two species' mutual civilization hangs in the balance. More
In volume three of the Beasts of Instruction trilogy, prehistoric beasts are intrigued by civilization but aren't dependent on it because they eat grass and leaves the same as their less intelligent equine relatives. Like young Benjamin Franklin, beasts believe that freedom of thought is the foundation of wisdom. Their associates the water primates have less leisure and fewer opportunities to reflect on the world around them and their place in it. For beasts, being herbivorous is both liberating and limiting. They seek out and put up with water primates because they have hands and easily accomplish tasks beasts can't. Because of their lack of dexterity, the beasts realize that understanding how the world works requires skills in trades as well as in arts and letters. Parents of younger readers should review this book for violence and sexual content.
Download: epub mobi (Kindle) pdf more Online Reader
lrf pdb txt
Price: Free! USD
Add to Library
Create Widget
Tags: ecofiction environmental fantasy geek fiction animal fiction ecological fantasy novels by scientists beasts of instruction
About Robert Turtle

I turned to writing ecological science fiction after helping design and build remote sensing instruments used to monitor environmental changes on earth from space. Thinking about the way the lives of animals are constrained by their environment fired my imagination. The characters in my novels were chosen partly in reaction to William Blake's aphorism "The tigers of wrath are wiser than the horses of instruction," and I wondered what it would be like if animals felt remorse. Nama and Westwind's reflections are akin to those described by Mary Austin in her short story "The Walking Woman."

You have subscribed to alerts for Robert Turtle.

You have been added to Robert Turtle's favorite list.

You can also sign-up to receive email notifications whenever Robert Turtle releases a new book.