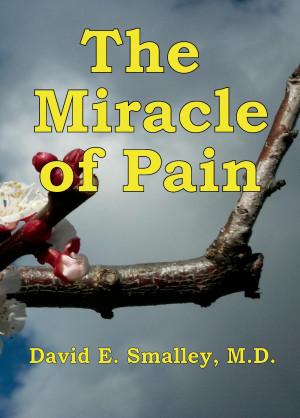 The Miracle of Pain

I recount personal experiences with pain, beginning at the age of 5, when I was hospitalized for over 3 months with a severe autoimmune illness and pain. My injuries since then have taught me more about pain, especially after medical school. During my practice of orthopedic surgery, trauma surgery and spine surgery, I enjoyed learning from my patients. In the 1980s, three spine patients, all with severe pain, sparked for me an intense learning experience while dealing with their challenging conditions, including cancer of the spine.

The true stories and principles I teach have worked for the benefit of many people. Experimenting with the principles has helped my own health challenges. Understanding the healing capacity of the human body gives hope and perspective. How average persons get into trouble trying to copy elite athletes in the news is reviewed to give perspective for the rest of us.

With my busy orthopedic surgery practice and family, I needed help to start the book in 1998. That year, of many Workers’ Compensation depositions, one of them was what I needed to get me started putting things down on paper. Two attorneys told me they just wanted to know what I knew about reflex sympathetic dystrophy, a chronic pain disorder. They asked because I had functioned as an evaluator for a patient about 6 months before, agreed to by attorneys for both the patient and the employer. They said that I was the only doctor, of four others, who had correctly diagnosed the pain. They also said that the other doctors later acknowledged that I was right because the findings later became more obvious.

After writing most of the book and 30 years of practice, I retired in January 2010. I describe physical, emotional and spiritual tools that can alleviate all levels of pain, whether it is from automobile accidents or from an ankle sprain. One of the simplest tools is when to use ice or heat, but there are many other good tools. How to recognize them and ways to keep from misusing them are given. Pain that is not improving, as expected, is all too common and frustrating for patients and doctors. Solutions for dependencies and addictions of many kinds are addressed.

In 1972, Dr. Smalley graduated from Brigham Young University with a B.S. in chemistry. He graduated from medical school in Washington, D.C. at George Washington University in 1976. Then, he was a surgical intern and resident at Ohio State University (OSU) from 1976 to 1978. Also at OSU, from 1978 to 1981, he served as a resident in orthopedic surgery.

He joined a private practice with other 3 orthopedic surgeons in 1981, Community Orthopedic Medical Group, Inc. He was a partner in the same group in Riverside, California from 1984 until he retired in January 2010. With more partners, they built an office building in 1985 with physical therapy, occupational therapy, pool therapy, an industrial clinic, The SPORT Clinic and later the DeAnza Surgery Center. They expanded to a multispecialty group of physicians, Community Medical Group of Riverside, Inc.

Since 2014, the building is owned by the adjacent Riverside Community Hospital, where he is an emeritus member of the medical staff. He has fond memories of the diligent medical, nursing and ancillary staffs of his office and the local hospitals.

He served as team physician for University of California Riverside Athletic Department from 1986 to 2000. He was a State of California Certified, Qualified Medical Evaluator from 1994 to 2010 and often served as an Agreed Medical Evaluator. He is Board Certified by the American Board of Orthopaedic Surgeons and an Emeritus Fellow of the American Academy of Orthopaedic Surgery.

Since childhood, he has been active in The Church of Jesus Christ of Latter-day Saints and the Boy Scouts of America. When the Trauma II services of a local hospital were in jeopardy in the 1980s and 1990s, he helped preserve them for the community, despite a decrease in income from many hours taking care of trauma patients. He felt that it was a worthwhile sacrifice.

You have subscribed to alerts for David E. Smalley, M.D..

Would you like to favorite David E. Smalley, M.D.?

You have been added to David E. Smalley, M.D.'s favorite list.