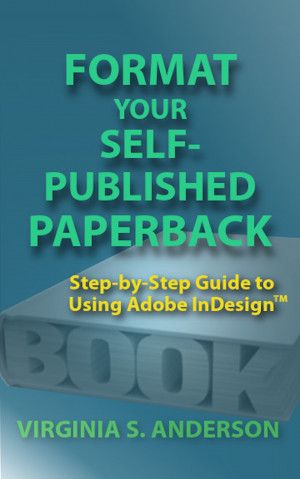 By V. S. Anderson
An illustrated step-by-step guide to formatting a paperback interior using Adobe InDesign(tm) for self-published authors who want to save on expensive professional formatting before submitting to book packagers. More
Don’t pay someone to format your book when you can do it yourself—using the gold standard of book designers, Adobe InDesign™. But isn’t InDesign really hard to learn? And expensive? FORMAT YOUR SELF-PUBLISHED PAPERBACK: STEP-BY-STEP GUIDE TO USING ADOBE INDESIGN™ makes using InDesign easy—and shows you how to try it out for free! It pares down the messy workspace of InDesign to the essentials—just the skills you need to get words onto a page! Completely illustrated, with many links to publishing information you’ll use.

First 15% Sample: epub mobi (Kindle) lrf more Online Reader
pdb
Price: $0.99
Free! USD
Buy with coupon Use the code AGB30 at checkout to get this book for free during our site-wide promotion!
(Offer good through May 31, 2020 )
Have a better coupon?
Add to cart, then apply your coupon
Add to Library Give as a Gift
How gifting works
Create Widget
Tags: selfpublishing book publishing book design paperback book diy publishing indesign design a book how to publish a book adobe indesign format paperback
About V. S. Anderson

You have subscribed to alerts for V. S. Anderson.

You have been added to V. S. Anderson's favorite list.

You can also sign-up to receive email notifications whenever V. S. Anderson releases a new book.