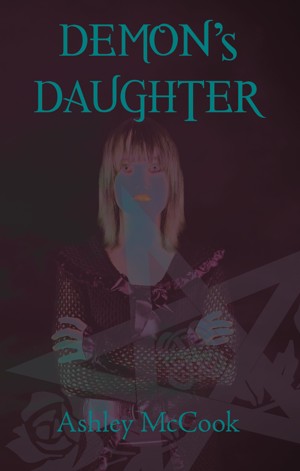 By Ashley McCook
Rated 4.75/5 based on 4 reviews
Before her dad showed up, Emily Carson was a sixteen year-old with the same problems as any other girl. Now she's discovered that she has 'demon' in her genes, Emily has a whole new world of issues - Weres, demons & vampires are everywhere & showing an unhealthy interest in the new half-blood. Having Fallen Angel,Sariel, as a bodyguard should help but Emily is finding him VERY distracting indeed! More
Sixteen year-old Emily Carson is an average nerd with three goals in life – acing her school exams, dealing with her brother Seth’s questionable taste in girls and curing school hottie Adam Farlow’s questionable eye-sight (the only explanation for his lack of interest).

And then her Dad shows up.

Discovering that your Dad is a demon certainly makes life much more interesting but even Demon Lords have enemies and Emily and Seth soon find themselves the new targets for every Vampire, Demon and Were in town.
Having Fallen Angel Sariel as a body guard should help but Emily is fast discovering that Fallen Angels can be very tempting indeed.

I live on the beautiful North Coast of Northern Ireland with 1 dog, 3 cats and 2 children! I love reading, watching scary movies and living near the beach. I hate talking on the telephone (I never know what to say!) and getting lost. My passion is writing stories that take you away from reality for a few hours, about characters that you can relate to and places that seem familiar.
My ambition is to create more hours in the day so that I can have more time to write!

Well...what to say about this book? It was just AMAZING! I didn't think I would have liked it so much, but I did!
And I admit I fell in love with Sariel! He's soooo charming! And sweet!
I liked Emily too. She is so funny! And strong. Although sometimes a bit stupid. But I found myself thinking like her most of the time. I think we're somewhat alike, though not totally.
Seth? He just got on my nerves most of the time! I really didn't like that he got along with Asmodeus so well. But maybe he wasn't strong enough to resist Asmodeus's mind control? Might be. Or maybe he was just dumb enough. In that I agreed with Emily. Seth's an idiot at times.
Joanna, their mother, I don't know what to think about her. I just couldn't get either a good or bad impression. She's easily manipulated and it kind of sickened me. And made me sorry for her. And kinda angry.
But mostly, it was Asmodeus sickening me. Just as Emily was sickened and repelled by him.
He's just... Ewwww!
Adam.... uhm... well... I don't like him. It showed from the start that he's an ass. I couldn't agree with Emily there. I couldn't see what she saw in him beside the looks. And, seriously? She got Sariel and he's the greatest guy ever! Why she kept going after that dumbass of Adam?!?!
Annie and Dylan were ok. They're good friends.

What I didn't like in this book was the use of italian phrases. WRONG italian phrases!
One thing you should know about me, I'm italian. And reading all those wrong phrases, all those mistakes... God, my eyes bugged out! I could barely understand what the author wanted to say. It was awful!
Some examples:
-It doesn't exist "Dolce uno" in italian! To say "Sweet one" you could say "Dolcezza".
-What the hell means "Cassaforte di giorno, quella cara"??????? I have yet to understand.
-And "Lo manco anche, Emily"? If you wanna say "I miss you too, Emily" then say "Manchi anche a me, Emily". For God's sake!
-"Quello piccolo" referred to Emily? First thing, "quello piccolo" does not exist! Second, "piccolo" is masculine, not feminine. If you want to say "Little one" you say "Piccolo" if referred to a male, "Piccola" if referred to a female.
-"Lo gradico molto"??? First, it's not "gradico" but "gradisco". Second, it's all so wrong to say "Lo gradisco molto" to a girl when you wanna say "I like you a lot". The right phrase is "Mi piaci molto".
And it goes on and on... It was a herd of mistakes that made me grimace.

I'd like to say something to all authors out there:
If you want to put some italian in your books and you don't speak italian, or you're not at least familiar enough with the language, DO NOT attempt to do it alone! Not even Google translator or whatever stupid translator you can find on the internet or in commerce could help you. You MUST at least ask help to an italian person that knows english. Or go to a REAL translator who knows what he/she's doing!
English readers that don't know italian might be fooled, but if an english reader knows italian enough, would just grimace like I did. If some italian readers like me read your book with so many mistakes... well, do not expect them to give you 5 stars even though the book and the story and everything else were awesome.
In fact, I'm gonna give 4 stars to this book.

This book .. words cannot comprehend how much i absolutely LOVED it. i was secretly hoping that maybe the second book was accidentally attatched to the first book , but alas my luck is not that good haha. This book had just the right amount of romance and action that leaves you desperately .. and i say DESPERATELY because i truly am waiting in agony .. for the next book. Such a good read, an amazing author whom im glad i found. 5 well earned stars.

(reviewed 22 days after purchase)
Sharmayne Weir reviewed on on March 9, 2012

I have just finished reading Demon's Daughter and I must say it was fantastic!! Cannot wait to read the next one Demon's Revenge!!

Loved the book. It was amazing. Going to re read it so I can properly review it but it had me wanting to keep reading right until the and then more.

Cannot wait for the second book hope it is coming out soon!!!

You have subscribed to alerts for Ashley McCook.

You have been added to Ashley McCook's favorite list.

You can also sign-up to receive email notifications whenever Ashley McCook releases a new book.