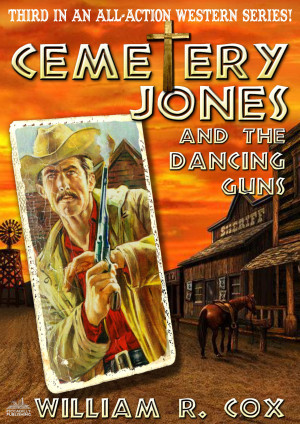 William Robert Cox, affectionately known as Bill, was born in Peapack, N.J. March 14 1901, worked in the family ice, coal, wood and fur businesses before becoming a freelance writer. A onetime president of the Western Writers of America, he was said to have averaged 600,000 published words a year for 14 years during the era of the pulp magazines.

One of his first published novels was Make My Coffin Strong, published by Fawcett in the early 1950's. He wrote 80 novels encompassing sports, mystery and westerns. Doubleday published his biography of Luke Short in 1961.

From 1951 Cox began working in TV and his first teleplay was for Fireside Theatre - an episode called Neutral Corner. It was in 1952 that he contributed his first Western screenplay called Bounty Jumpers for the series Western G-Men which had Pat Gallagher and his sidekick Stoney Crockett as Secret Service agents in the Old West, dispatched by the government to investigate crimes threatening the young nation. He went on to contribute to Jesse James' Women; Steve Donovan, Western Marshal; Broken Arrow; Wagon Train; Zane Grey Theater; Pony Express; Natchez Trace; Whispering Smith; Tales of Wells Fargo; The Virginian; Bonanza and Hec Ramsey.

William R. Cox died of congestive heart failure Sunday at his home in Los Angeles in 1988. He was 87 years old. His wife, Casey, said he died at his typewriter while working on his 81st novel, Cemetery Jones and the Tombstone Wars. We are delighted to bring back his Cemetery Jones series for the first time in digital form.

About the Series: Cemetery Jones

He's Sam to his friends, Cemetery Jones to his unlucky enemies. Lucky for Jones he was born suspicious. And dead quick with a gun. Suntise is a frontier town, just beginning to stretch. Till outlaws vow to take out the whole damn place to revenge themselves on the new marshal, named Cemetery Jones.

You have subscribed to alerts for William R. Cox.

You have been added to William R. Cox's favorite list.

You can also sign-up to receive email notifications whenever William R. Cox releases a new book.