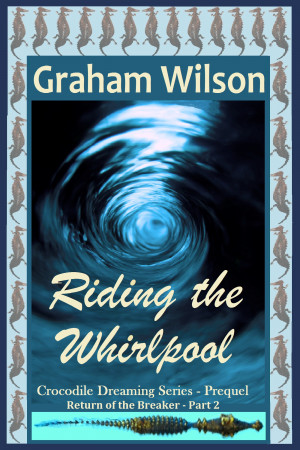 My lover is dead killed by my gun
My friend is dead, killed by a bull
Unbearable loss, what can I do?
Hide, hate, or punish someone?
I am MB, horse breaker now bull rider
Once a lover - still a fighter.

I will ride a bull into the ground.
I will kill any others who had a part.
Vengeance is now my only game.
But she, most beautiful, will still remain More
This is the second half of the prequel of the Crocodile Dreaming Series, an acclaimed dark Australian outback story.
The Series tells the story of an English visitor Susan who is is captivated and in great danger from a charming man, MB, who love crocodiles, and traverses remote outback Australia in the manner of Crocodile Dundee and Breaker Morant, working on stations, breaking horses, mustering, communing with nature.

Susan goes travelling with him to places unknown whether no others go. But as she does she discovers terrible secrets, she finds passports of four missing girls, vanished, assumed dead. She takes the only way out she can to escape this man. But who is this person that she thought she loved. Is he an evil monster or is he a victim?

Now read the Series Prequel to hear the story told through this man, MB's own eyes

It tells of a man consumed by rage at the loss of his lover killed by his hand, and then of his friend, a fellow rodeo rider, killed by the bull Whirlpool. He will find who is responsible and enact a terrible retribution.
Once a great rodeo rider following in the footsteps of Breaker Morant.
Now he harms all he touches as the whirlpool of grief and vengeance drags him down.
Then he discovers her, Susan, she is so very beautiful and she loves him too.
But she needs to know who he is and he knows the truth will destroy her.
There is no way out but a final act of vengeance upon himself.

This book concludes the story of the man, MB, someone who desires to walk in the footsteps of the Breaker, a man whose final words to his execution squad was 'Shoot Straight You Bastards'. He has made his choice, he must go the same way - there is no other path to save the one he loves.

This is an early version of the book which may contain some editing issues. It has been released for free to encourage readers to read and review it. If you have suggestions for improvement the author would value your input. It and its first half, Crocodile Child : Breaker MB, will be kept free for the first month of its publication before undergoing a major revision using reader feedback.

Of course you are welcome to read them just for enjoyment, no strings attached. But if you really want to help me make them as good as possible then please send me you comments, either by direct email or public review.