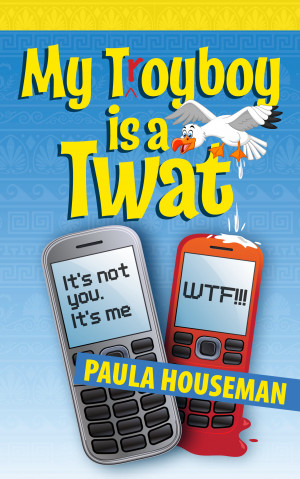 ‘Keep your mouth shut!’ This, from Ruth Roth, inspirational columnist for a women's magazine.
It's not the best advice to give your new husband, but men don’t listen, do they?
When he tells all, the fall-out is like a layover in hell. Horrid, and yet…tantalising. Who knew the underworld had so many subdivisions? But Ruth may be stuck in the horrid after another skeleton comes out of the closet! More
Love, romance, marriage, and a dark little secret. Shh … Small things let loose can grow out of hand.

Ruth Roth’s new husband can’t keep it in. If only he had all those years ago, things might be different now.

His big mouth sends every family member into hell. Except for Ruth’s late mother. She blows in from there. Seems the woman just won’t die. Or let up. Faaaark!
As if Mama’s ear-bashing isn’t enough, everyone else needs a scapegoat. Ruth is it. Somehow, this mess is her fault.

With everything falling apart, she feels overwhelmed. Until a hunky celebrity pants man—who clearly wants to get into hers—befriends her and makes her feel all warm and fuzzy. At the same time, an educated silicone seductress has designs on hubby.

Temptation abounds. But it’s overshadowed when a startling discovery throws Ruth and her man into uncharted waters, and life comes crashing down.

Ruth has survived plenty with the help of her friends. And as a writer, her wry wit, dirty muse, and a bent for ancient mythology have sustained her. This, though, might be her undoing.

I grew up in an episode of South Park on an endless loop.

Or so it seemed.

What felt like hard yakka at the time is now a fabulous cache of raw twaddle to draw on.

When I first realised that my early, quasi-fictional home environment had distorted my understanding of selfhood, I became curious about the concept of identity. As a graphic designer, I’d already been creating business ones for others through imagery.

But scratching the surface wasn’t enough for someone who asked a lot of questions. So, I went to university and, majoring in linguistics and sociology, I learned about the power of word usage to shape our identities and realities.

Still not enough, though.

I dug deep into the substratum until it felt like I was schlepping through a filthy ancient myth. Or an episode of South Park. It was like a homecoming.

Not a bad thing because I uncovered my muse, the butt-ugly, goddess of obscenity.

She, who embodies a holy kind of dirty, shows me the absurdity of the human condition, reminds me about the value of laughter, and is responsible for my dirty bazoo and the bawdiness in my books. My three Amazon #1 bestsellers (British satire and humour category) are part of the Ruth Roth series, but all are standalones. Book 1, a Readers’ Favorite Award winner, is the coming-of-age chick lit, Odyssey in a Teacup; Book 2, 2019 New Apple eBook Awards Humor Official Selection, is the romantic comedy Cupid F*cks Up (formerly known as Apoca[hot]lips); and Book 3, My Troyboy is a Twat, is also a romantic comedy. Book 4 is just around the corner.

You have subscribed to alerts for Paula Houseman.

You have been added to Paula Houseman's favorite list.

You can also sign-up to receive email notifications whenever Paula Houseman releases a new book.