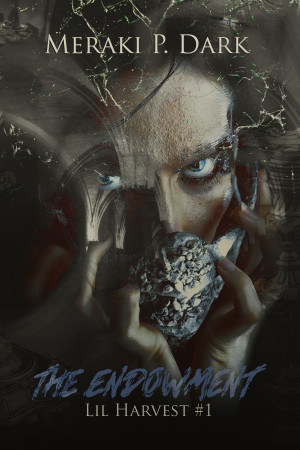 Kendrick was a mere stable boy under the rule of the cruel Lord Sterling. A stallion breaching the fence set off the Lord’s sadistic tendencies on the innocent stable boy. Had it not been for a Lil-demon (incubus) watching and feeding off the torment from the shadows, it would have been just another abuse at the manor. But the demon, Bakzel, made the stable boy an offer he couldn’t refuse. The offer of getting revenge. Yet, every wish has a consequence, but Kendrick was too broken to think about that when the Lil-demon cast the spell.

*Please note that the Lil Harvest is in the genre Horror as it contains the effects of demonic manipulation, and as a result, content in these works may contain graphic scenes of depravity, cruelty, and violence—sexual or otherwise—that could be offensive and potentially triggering to some readers.
Available ebook formats: epub mobi pdf lrf pdb txt html
First 10% Sample: epub mobi (Kindle) lrf more Online Reader
pdb
Price: $1.99 USD
Buy Add to Library Give as a Gift
How gifting works
Create Widget
Tags: gay erotica dark erotica
About Meraki P. Dark

Meraki P. Lyhne/Meraki P. Dark is a Danish author who mainly writes contemporary paranormal MM and MMM, some with a HEA, some with a HFN, and some with white-knuckling cliffhangers. The pseudonym Meraki P. Dark takes the brave readers into the dark side of the genres.
Follow newsletter here: http://eepurl.com/cfUSmX

About the Series: Lil Harvest

In the beginning, an Incubus was merely a low-ranking demon who fed on the sexual terror he could inflict upon a human being. But that was before one of them got the idea to turn a human with nothing to lose into the perfect demon feeder.

Reviews of The Endowment by Meraki P. Dark

When I started reading this book, I could have sworn I had read it before, although I knew I had not. The first several pages, however, reflected an exact scene I had read in apparently another story....strange. I also wondered what possessed me (pun intended) to agree to read this book because I could tell it was going to be so dark as to be black in its theme. Not normally my thing.

But with all that in mind, the story was well constructed, had a good plot and an ultimate HEA. The road to get there, however, was filled with deeply damaged and flawed characters, especially the main male protagonist, Kendrick. After suffering the ultimate physical and emotional trauma at the hands of his overseer, he is given the opportunity to take his revenge by a demon who witnessed the traumatic act, making him into a human incubus and virtually indestructible. With the assistance of a supporting cast of Lil demons, he spends the next 10 years "harvesting energy" from both innocent and criminal humans in the most vile and disgusting sexual ways in order to "feed" his little group.

Ultimately, a bond develops between Kendrick and his rapist, and to protect him from having to endure even more pain at the hands of the master demon to whom Kendrick had agreed to give him as a present at the conclusion of his 10-year contract, Kendrick gave him the gift of suicide as a preferable out. You could say that gift was given in love, as incongruous as it might seem.

This story has so many triggers that if you don't have a strong stomach and an even stronger determination to keep an open mind, you should pass this book by. For me, it was too much, and it will be the first and last book I read by this author.

Although the story was well written, I do have to take issue with the author's frequent misuse of language and slang. It did not always express itself in the time period in which the story was set.

When I first saw all the 5-star ratings for the book, I thought "Are these people nuts? Or a bunch of perverts?" but upon reading their thoughts about the story, the series and the author, I could understand and respect their views. We all don't march to the same drummer.

I must I was hesitant to read this book because I thought I won’t be able to handle it. But this was a awesome beginning to the series. I’m looking forward to reading the next installment.

So first, I fully acknowledge that I am a rather twisted individual. Please heed all warnings that this is a rather dark and depraved novel.

That being said, there is absolutely plenty of character development, world building, and plot to go along with the depravity. I very much enjoyed seeing how the demon feeder struggles to reconcile himself with what he becomes and what he must do. Learning more about the demonic hierarchy was fascinating as well. Absolutely worth reading if you enjoy the darkness!

Best book very it was amazing

I came to this series after reading Colosseum of Lust, and absolutely loved it! It's so dark and twisted, and I'm going to devour the rest of the series too!

(reviewed 12 days after purchase)
Thomas ashmodai Laufey reviewed on March 16, 2020
(no rating)
An excellent read really shows how I feel towards the one who raped me and really helps with those feelings of complete and utter hatred torwards that man . Thanks Meraki p dark
Sincerely Thomas Laufey

First, please be mindful of the content warnings and descriptions for this book and series. (Small spoilers in review to follow)

The world building and the character development are brilliant. This book is an updated version of a rape-revenge narrative with a demonic twist, and in which the victim of sexual violence becomes a perpetrator of violence. It features significant amounts of both dubious consent and non-consensual sexual interactions. The way Dark writes this novel, though, can create a wild amount of catharsis for the reader around sexual trauma. I found the novel moving, troubling, interesting, and so much more. Again this is a type of dark erotic horror that some folks would struggle with, so read with caution. But the writing, storytelling, characters, concept, and world-building are exceptional. Kendrick, our main character, embodies my favorite type of character: one who is damaged, struggling, and yet still unwilling to surrender to the trauma and who still find his way to not just survival but thriving.

I can only assume that if you go for this book, you don't expect anything sweet to come out of it, which is true. It's very dark, it's deprived and it's inventive.
The consent happening here is few and far between and only after someone is broken until they are a compliant shell of what they were. And it's what you go in for, it's rape and abuse all built on the dealings of a cruel Lord.

And while it's all these things, it's still a story that holds you in place and gives room to enjoy how friendships and personalities evolve and at it's darkest, there is a lighter moment and after everything that had happened, it caused me to shed a few tears. The softness in between it all.

You have subscribed to alerts for Meraki P. Dark.

You have been added to Meraki P. Dark's favorite list.

You can also sign-up to receive email notifications whenever Meraki P. Dark releases a new book.