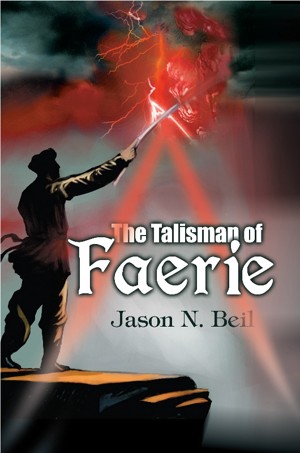 The Talisman of Faerie

By Jason Beil
A powerful magic artifact falls into the hands of a young baker’s apprentice, who must keep it safe from the vile sorcerer who desires it. More
Alec Mason is a humble baker’s apprentice from a simple farming village on the outskirts of Tyridan. But when he discovers an ancient artifact of immense mystical power, he becomes the target of Salin Urdrokk, the dark sorcerer who desires it. With his friends Sarah and Kraig, Alec is forced to leave the life he knows and enter a world of danger and intrigue.

Joined by a mysterious hermit and a warrior they cannot entirely trust, Alec and his companions flee Salin’s agents, braving the uncharted wilderness north of Tyridan. Beyond deadly forests, plains, and mountains lies the realm of Faerie, the one place Alec might find sanctuary.

A trained vocalist and musician, Beil graduated from Millersville University in 1993 with a Bachelor of Arts in Music. He pursued musical theater in his twenties, appearing in productions such as Cabaret, Oklahoma, Some Like It Hot, and Jesus Christ Superstar. He previously sang with the holiday a cappella group, Occasional Singers. Until the end of 2015, he was the keyboardist of the popular east coast cover band HyJinx (aka Lovely Rita). He has since reunited with his very first band, The Rockadudes.

Also in Series: The Talisman War

Reviews of The Talisman of Faerie by Jason Beil

You have subscribed to alerts for Jason Beil.

You have been added to Jason Beil's favorite list.

You can also sign-up to receive email notifications whenever Jason Beil releases a new book.