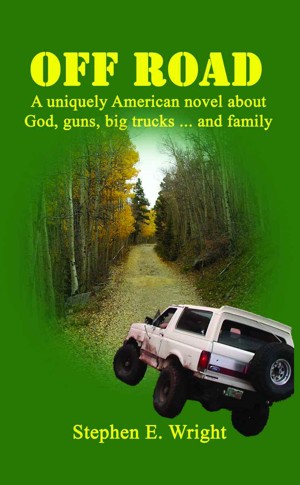 By Stephen E. Wright
Off Road is a journey into the uniquely American world of God, guns, big trucks, family ... and the new American civil war of progressives vs traditionalists.

Read my novel, and you'll find out more about me than you'd ever want to know. But here are a few more facts:

* I live in Denver, Colorado.

* Though white, I grew up on a Native American Reservation in Arizona (with the Tohono O'odham -- then known as the Papago -- tribe)

* I helped produce, wrote the scripts for, and did much of the grunt work for a locally produced TV sitcom (it was admittedly cheesy, but a WHOLE lot of fun!)

* I make my living as a techie. Until I can get rich as a writer

* Writing is my passion. I don't know why. I guess I think I have something to say others might care about. If I'm wrong, please don't tell me.

* For some years I was probably the most successful movie writer that NEVER got a #%@! Hollywood movie produced! Close, but no cigar.

Much more information on http://stephenewright.com

Reviews of Off Road by Stephen E. Wright

You have subscribed to alerts for Stephen E. Wright.

You have been added to Stephen E. Wright's favorite list.

You can also sign-up to receive email notifications whenever Stephen E. Wright releases a new book.