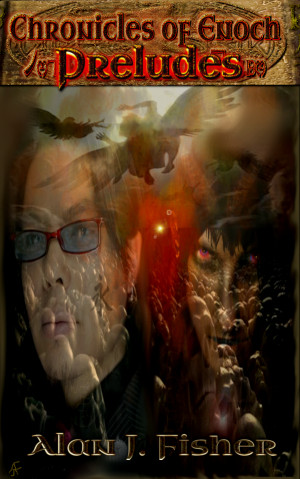 The Chronicles of Enoch : Collected Preludes

By Alan J Fisher
Darkness. The human race has, since its very inception, done everything it can to try and eliminate it. They light their cities and turn night into day, trying to deny that the shadows are still there. Even if one cannot see a thing, it does not mean that it is not there, only that it is waiting...patiently waiting More
The sequence of events proceeding the main Chronicles of Enoch Series

When one is at war or, at least, it appears that one is does only the force of arms one bears affect the chance of victory?

Men die, women and children die...dear Lord, even immortals can die if you know what you are doing. The Exile murdered a Giant twenty times his size with what appeared to be very little effort. Throughout your history, there are illustrations of the concept I am trying to highlight to you; the largest army full of the largest warriors does not always guarantee victory. Far from it, in fact. Victories are born in here; the heart and the mind.

An occupying army can be murdered in their sleep by the conquered, poisoned as they eat or bathe. The oppressed and downtrodden inevitably rise up. Win the heart and they will not.
A superior force can be overwhelmed by a much smaller one that uses its mind, look at Alexander the Great when he defeated Xerxes with a much smaller army.

You do not win battles or wars simply using swords and armour, although they do help. You win by knowing what your enemy is going to do before he does it. You win by having her think that you are, in fact, her very best friend in the whole wide world.
Available ebook formats: epub mobi pdf lrf pdb txt html
First 20% Sample: epub mobi (Kindle) lrf more Online Reader
pdb
Price: $2.99 USD
Buy Add to Library Give as a Gift
How gifting works
Create Widget
Tags: demon angel lucifer enoch books of enoch heaven at war chronicles of enoch
About Alan J Fisher

Alan J Fisher was born in Belfast, Northern Ireland 41 years ago. Since he could talk he has had a love, a passion for words. he would argue with his mother over semantics from the age of 4; he would compose his first poems at around 8 years of age and have songs he wrote performed at school. A life long passion of writing for the sake of writing; "setting the words free" as he likes to call it!

Alan has travelled the world, living in England, Spain and both New Mexico and Georgia in the USA. "Travel broadens and improves the mind and makes it harder for bigotry to take root there". He has always been open minded and accepting of other cultures and believes this shows in his writing. He has lifelong friends across the world.

This project Alan is now releasing has been 25 years in the making! At 14 or 15 he began the early drafts in exercise books, scribbles and scrawls he typed up; first on an old mechanical typewriter his parents had, then on one of those single line screen electric typewriters which were around years ago (I think that thing is still in my parent's basement somewhere! Does anyone remember the gawd awful experience of making even ONE typo on those things??). The story has developed, grown and evolved over successive rewrites and restyles over the years and now, now finally it is ready to release into the Wild!

Fascination with history, myth, and the origins of civilisation are what drive Alan the most. A deep-seated belief that all of the stories were, at least, at some point grounded in a truth. In his writing, he seeks to find the "stories behind the stories" and uncover the messages they hide; deeply hidden but intrinsically simple. The search for knowledge had been long and hard fought but it misses one very important clue, hidden in plain sight; that the answer is and always will be simple.

The Chronicles of Enoch seeks not only to be an epic of truly wide-reaching proportions but a work grounded in what the author likes to call "complex simplicity". Alan's works are all, by some effect he is unable to overcome, complex and many layered but, at the end of the day, the message is simple; 'believe not all that you perceive for even your own mind may not be working exclusively for you. Challenge everything, question all, and listen with a doubtful ear.'

Alan is now living in Southern Spain with his wife and children joining him there soon.

Reviews of The Chronicles of Enoch : Collected Preludes by Alan J Fisher

You have subscribed to Smashwords Alerts new release notifications for Alan J Fisher.

You have been added to Alan J Fisher's favorite list.

You can also sign-up to receive email notifications whenever Alan J Fisher releases a new book.