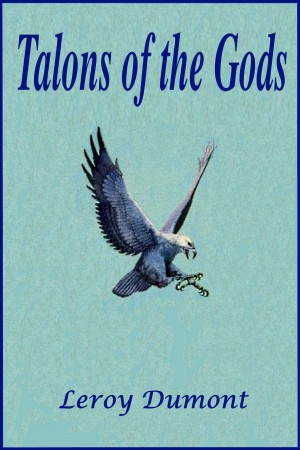 Talons of the Gods

The disembodied spirits of the Sorcerer Karanis vie for possession of two enchanted bracelets with highly destructive power. In the process, they strive to control the Voltaran Empire which Daran, the youthful heir, is about to depose his usurper uncle and cease control. Daran is aided by the paladin, Ethran, a skilled warrior who seeks to retrieve the enchanted bracelets for the rightful heir.

Basic (boring) facts: I (Leroy Dumont aka Anthony Dias Souza) was born at Ahualoa, Hamakua, Hawaii on April 26, 1935 at 7:39 PM. Attended school in Hawaii. Graduate from St. Louis College (now Chaminade College), To avoid the draft, I enlisted in the USAF but was recruited out of Boot Camp by an "intelligence agency"; and served 3+ years in the Far East where I picked up the code name Leroy Dumont (don't ask). Resigned and returned to the States to form an outlaw motorcycle club with my partner then, when I almost killed myself on my Zundapp (a real Nazi SS pursuit motorcycle), I decided to go to college for the next fifteen years. Was a liaison aide for a U.S. Congressman along with other political offices. Then burned out and settled into electronics (computer type). Programmed a while in Pascal and a few other languages. Had two wives, one died, one divorced. Six sons and a host of grandchildren et cetera now counting over 22. Spent all this time writing. Retired and now writing full time. See, I warned you it would be boring. All of the spicy, erotic, exciting and illegal stuff I incorporate in my novels. It&#39;s safer that way. There is no statute of limits in fiction. Know what I mean?

You have subscribed to alerts for Leroy Dumont.

You have been added to Leroy Dumont's favorite list.

You can also sign-up to receive email notifications whenever Leroy Dumont releases a new book.