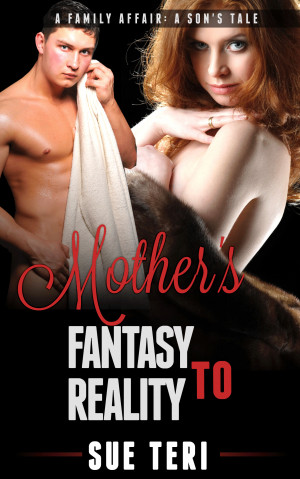 Paul Anthony is not your typical college student. Since he was a young teenager, he has had secret fantasies about his mother. For as long as he could remember, he dreamed of what it would be like to have sex with her. He later discovered that his mom wrote taboo stories. Paul Anthony found out that he was not the only one with secret incest fantasies. Now would they become a reality? More
Paul Anthony is not your typical college student. He does not like to party nor does he have a lot of friends he hangs out. Most of his college classes are online so he can do them at home. He likes being at home, especially when his mom is there. He was so glad when he finished his last test for the semester that evening because now, he was on vacation. His mother’s vacation also coincided with his, even though she was going to work from home some.

His father was out of town on business for the next two weeks so it was going to be just him and his mother. The forecast was for a heavy snow the next couple of days so they were going to be snowed in. This did not bother him because him and his mom enjoyed each other’s company and they never got bored together.

Paul Anthony also had an ulterior motive for wanting to spend more time with his mother. Since he was a young teenager, he has had secret fantasies about his mother. For as long as he could remember, he dreamed of what it would be like to have sex with her.

After sharing a meal together, his mom went upstairs to take a shower. Soon after, he went upstairs himself. As he passed his mother’s room, the door was open and her laptop was open, facing him. Curiosity got the best of him so we went in and when he looked at what his mother had been working on, he was shocked. His mother was writing an incest story about a father and daughter.

His mom caught him and was upset that he invaded her privacy. He apologized and quickly left for his bedroom. He couldn’t believe what he saw but he was also upset that he made this mom mad. His laptop dinged, which meant a new email. He was surprised that it was an email from his mother apologizing for yelling at him. She also explained why she was writing that story and sent him a link to a site where she had posted multiple incest stories. Her profile also included naked pictures she had taken of herself and posted with her stories.

Reviews of Mother's Fantasy To Reality by Sue Teri

You have subscribed to alerts for Sue Teri.