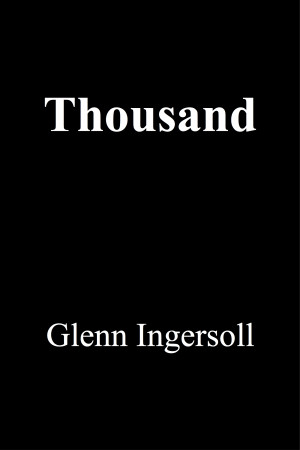 Glenn Ingersoll has been in the Bay Area poetry world since the early 1990s and has contributed to the community in many capacities. Early in his career, he served as coeditor of "The Berkeley Poetry Review." As an author, he has contributed works to many poetry magazines and anthologies. He has performed many times as a featured reader and has attended many open-mics throughout the Bay Area. Currently, he works for the Berkeley Public Library and also serves as host and facilitator for the monthly poetry circle there. In addition to putting out chapbooks such as “Fact” and “City Walks,” he maintains a voluminous blog called “Love Settlement” and another blog called “Dare I Read.” His work has appeared in such publications as “Poetry East,” “Askew,” “Futures Trading,” and “BlazeVOX.” And, of course, he is the author of the immense prose-poem “Thousand,” a one-hundred-thousand-word opus published in 2018 / 2019 by Mel C. Thompson publishing, both on Amazon in paperback form and here on Smashwords in ebook form.

You have subscribed to alerts for Glenn Ingersoll.

You have been added to Glenn Ingersoll's favorite list.

You can also sign-up to receive email notifications whenever Glenn Ingersoll releases a new book.