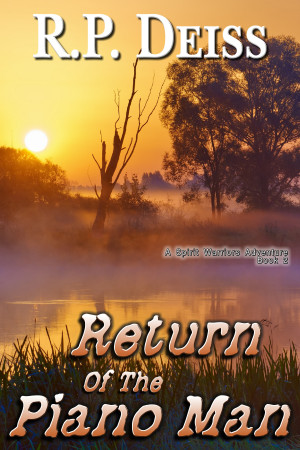 Return of the Piano Man

By R. P. Deiss
I’m Jim Barnett, the father of two Spirit Warriors. Alex and Lindsey can see and talk to the dead. They gained their powers when we had our new home unknowingly built on the remains of an old Indian village. I’m going to use their supernatural abilities to track down a vicious serial killer and bring him to justice. More
The national media named me the Piano Man. It’s because I love to use a piano wire garrote to strangle my helpless victims. It’s been 15 years since I held the Fox River Valley in an icy grip of terror. I’ve missed the power I held over others. The fear I’ve felt in them as my wire tightened around their throats was exquisite. Well, I’m back to continue where I left off, let the killing begin!

My sister Lindsey and I are Spirit Warriors. Last year we became Spirit Warriors when our parents had our new home unknowingly built on top of an ancient Indian village. Abilities we didn’t know existed were awakened inside of us. Now we have great powers we can use over the dead and as our powers increase over the living too. Dad has put us on the trail of the Piano Man. The killer thinks that he hasn’t left behind any witnesses to his crimes; he’s dead wrong. He’s left the spirits of those he’s killed to help us identify him! We are able to see and talk to the dead just like I am with you right now. I’m getting very angry with the killer, all of the innocent lives lost and the pain felt by families of the dead. Now it’s his turn to feel some pain, right Lindsey?

Right Alex! We have many great powers that we can use over the living and the dead. We are going to take this animal down, one way or another. I hope he doesn’t come quietly. It will give us an excuse to mess him up, big time!

It’s time to teach the Piano Man a new tune!

Hi, I'm a 54 year old Wisconsinite. I served in the Navy during the closing days of Vietnam as part of Operation Frequent Wind. I held a top secret clearance as a radioman. I honed my typing skills on the keyboard of a teletype while serving my country. I'm a 3 term commander of our American Legion Post and designer of our Veterans Memorial. I spent 19 years in the Boy Scout program including 8 years as scoutmaster and helped 11 boys reach Eagle Scout. I also did 11 years as committee chairman. I've written and given many speeches on Veteran issues. . I live in Northeast Wisconsin with my wife Darlene, I have two grown step daughters and six grand kids. I found that i have an insatiable love of writing. I did the first draft of Dead Men's Isle in three weeks. I also did a thriller called Copperhead which will be coming out in february and am now doing s sequal to Dead Men's Isle. I have now written a total of 5 books for your enjoyment. I hope that I can bring you into the pages of my books for a journey that will transport you on an adventure of a lifetime!

About the Series: Spirit Warriors 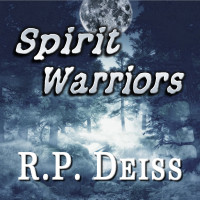 My brother oversaw the building of our family home in the woods before my discharge from the Marines, after 22 years of service. Unknown to us, the home was built on a village which had been decimated centuries ago by another tribe. As the supernatural powers increase, surrounding our property, so do my kid’s ability to see and control what is happening around them. Soon, they can communicate with the dead as easily as the living. Now they help solve crimes by talking to the deceased victims, making them Spirit Warriors.

You have subscribed to alerts for R. P. Deiss.

You have been added to R. P. Deiss's favorite list.

You can also sign-up to receive email notifications whenever R. P. Deiss releases a new book.