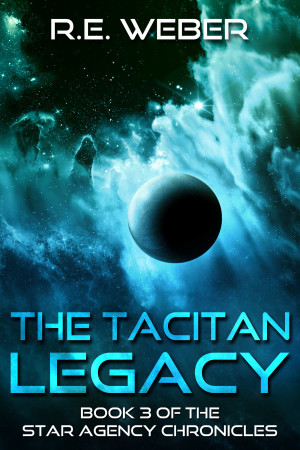 By R.E Weber
The Tacitan Legacy is the third adventure in the Star Agency Chronicles - an exciting, young adult science fiction adventure series, suitable for ages 11 and upwards. More
An ancient secret. A deadly assassin. A race against time…

When a series of prominent planetary leaders are found dead with the energy mysteriously ripped from their bodies, the Affinity must face the terrifying possibility that an enemy has taken control of the lethal technology left behind by an extinct, all-powerful alien race known as the Tacitan. Forced to respond to the unprecedented threat, the Star Agency initiates the rarely-used Dynax Protocol – the re-assignment of the Affinity’s top specialists to the hastily-assembled Dynax fleets, ready for dispatch to every corner of the Affinity.

Enduring months of hardship in the isolation in deep space, Theo Logan, his human friends and the crews of the Dynax fleets are pushed to their mental and physical limits not only by their enemies but also their ruthless commanders, who will stop at nothing to protect their way of life. Engaging in a deadly interstellar arms race, the fleets must risk everything to capture those wielding the terrible weapon, no matter the cost to themselves.

Meanwhile, back on Earth, Julie Kingsley is forced to confront the staggering truth surrounding the fate of her lost friend, Theo, and her place in a Universe she can barely imagine.

The Tacitan Legacy is the third adventure in the Star Agency Chronicles - an exciting, young adult science fiction adventure series, suitable for ages 11 and upwards.

R.E.Weber began his fiction writing career in January 2013 by publishing THE STAR AGENCY - an Interstellar Secret Agent adventure, aimed at readers aged 9 and upwards. The second book in the series THE VOYAGES OF THE SEVEN has now been released and will be followed by further books in the coming years.

When not reading or writing, he is often to be found indulging in his other passions, which include running, astronomy and cinema going.

A Yorkshireman, born and bred, he now lives in Bedfordshire, UK with his wife & cat.

About the Series: The Star Agency Chronicles

The Star Agency Chronicles is an science fiction adventure series suitable for readers 11 years and above. If you think you know science fiction, think again...

You have subscribed to alerts for R.E Weber.

You have been added to R.E Weber's favorite list.

You can also sign-up to receive email notifications whenever R.E Weber releases a new book.