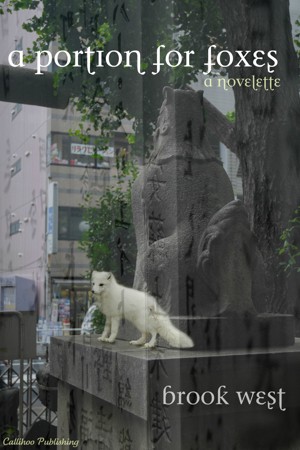 A Portion for Foxes

Brook West grew up in Holladay, Utah, where he took an interest in fantasy and science fiction at an early age.

He's had an eclectic and wide variety of jobs. He served as a Marine in Vietnam, and later served as a missionary in Japan for the LDS church. As an electronics technician he's repaired everything from radar equipment to mainframe computers. He's spent time at sea, worked as a bookbinder in both Western and Japanese styles, built ultrasonic sensors for artificial arms, worked on field studies of lizard diets, made jewelry, worked as a lifeguard, made maps (including a map of the geomorphology of the Dao Vallis area of Mars), published fanzines, scuba dived, worked in a pharmacy, participated in an archaeological dig in western Utah, and more. He has studied Vietnamese, Hebrew, Arabic, and is fairly fluent speaking, reading, and writing Japanese.

In college he studied world building, earning a degree in physical geography, with a minor in biology. This works nicely when he collaborates on stories with his wife, who is an anthropologist. He builds worlds, and she peoples them. He was a published finalist in the 11th Writers of the Future contest. That story appeared in the same volume as his wife's (which won the contest's grand prize for the year).

He served ten years as the Nebula Awards Editor for the Science Fiction and Fantasy Writers of America and received the Service to SFWA Award in recognition of his work.

Reviews of A Portion for Foxes by Brook West

You have subscribed to Smashwords Alerts new release notifications for Brook West.

You have been added to Brook West's favorite list.

You can also sign-up to receive email notifications whenever Brook West releases a new book.